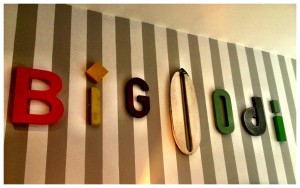 More than 6 weeks ago I was approached by the owner of a PR agency asking if Mini would like to review a hair cut at their client, Bigoodi.  The press release describes Bigoodi as ‘the UK’s number one kids concept store’. 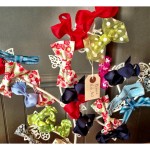 In reality, it is a toy shop with a few designer clothes for those wishing to spend more than average on their darling’s attire.  It also boasts a hairdresser or two to cut their hair while said darlings are utterly absorbed by the surrounding TVs, car/airplane chairs and general materialistic kids’ heaven.  Glancing quickly online, I did express some concern that my not-particularly-sophisticated 8 year old might not be so impressed by the babyish gimmicks.  But, I was assured by the PR that Bigoodi caters for up to 15 year olds! 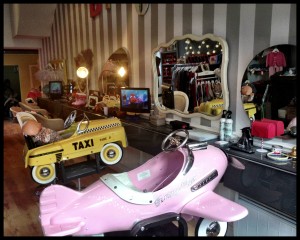 So I booked her in for first thing in the morning (well, 10am is first thing when we are school holidaying) before realizing that it was more than a skip and a jump from home.  But I’m a firm believer in not letting PRs down –  as well as dead keen to make sure the Smalls leave our neighbourhood whenever possible.  Life outside of North West London is always worth the trip.

Re-reading the press release I noticed that the owner of the PR agency was also the owner of Bigoodi.  Not a bad move, I thought.  (Back in my Matthew Freud days, he would often have some involvement (ie cash) in a new client and set me to work on the PR.)  In fact, it can provide a great editorial result as the PR knows exactly how to play into the journalist’s hands. 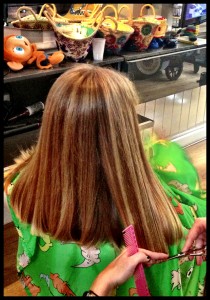 Mini and her mane

Back to Bigoodi.  When we arrived (I must admit we were 10 minutes late due to the distance travelled), the salon/shop was completely freezing.  The PR refused to acknowledge that sub-zero temperatures might be uncomfortable for those with wet hair.  And then the wet hair became an issue too.  The hairdresser explained that they don’t like to wash the childrens’ hair.  Now, Mini has a mane thicker than any horse so there is absolutely NO WAY you could cut her hair dry.  From here on in, things pretty much went down hill.  I could bore you to death by recounting the entire shambles of the experience but Mini might read this in years to come, completely putting her off hairdressers in general. 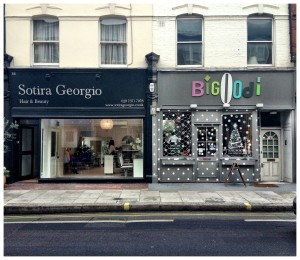 Bigoodi and the REAL hairdressers next door

Let’s just say this.  I ended up trying to dry her sodden clothes with hair dryers (they clearly don’t wash the kids’ hair because they can’t!).  The hairdresser they had organized for us to review was brand new to Bigoodi and was nothing better than inept and, when I asked to speak to the owner, she was nowhere to be found.  And, believe me, I kept calling and emailing for a full 48 hour period afterwards.

As we left (looking for a coffee shop to get warm), Mini noticed a ‘real hairdresser’ next door to Bigoodi.  ‘Next time, Mummy,’ she shivered, ‘let’s just go to a normal hairdresser’.  I whole heartedly agreed.

2 Responses to Clearly not a Bigoodi