Dîner en Blanc/Sanderson Session: White and Black in the City 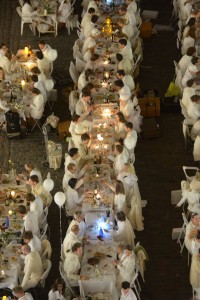 Last night was an evening of visual contrasts. Covent Garden played host to London’s first ever Diner en Blanc dinner.  The concept of a mass, chic, pop-up picnic, with all diners obligatorily dressed head to toe in white, is already a huge success in Paris, New York and where it first originated more than 20 years ago in Montreal.

The shebang is shrowded in secrecy and I was only given details as to the location an hour before it kicked off.  Arriving at Covent Garden tube station, along with hundreds of elegant, quirky and slightly bonkers picnic-makers, all dressed in white, I knew I was in the right place.

I watched (slightly voyeuristically) as they began setting up their tables and chairs (yes – all white – the rules are strict) and unpacking their elaborate dinners while the three-piece band played some easy jazz.  The atmosphere was electric and the vision rather splendid.

As I admired the extent to which some of these elegant foodies were quaffing their champagne in crystal flutes, I felt curious enough to dip into the crowd and ask how they had heard about this quirky spectacle.    Most had some sort of French connection and they either knew someone who had been to the recent Paris event or had read about it in the French press. 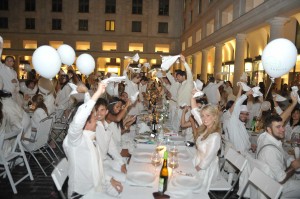 Once everyone was ready, white napkins began waving frantically.  I learnt that this was to indicate the beginning of dinner. 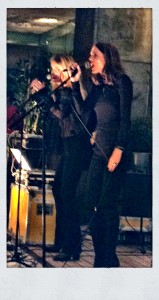 At this point I had to leave the scene of whiteness and head for the Sanderson Hotel, W1.  And I needed a black cab if I was to make the Saint Lou Lou session in the hotel’s iconic courtyard.  Amidst the PRs, waitresses, a crowd of local trendies and the singers themselves, I immediately noticed… they were all dress in BLACK.

The Saint Lou Lou twins, Elektra and Miranda Kilbey, have only recently left school.  Their debut single ‘Maybe You‘, was released online a few months ago and has since been highly appraised on a huge number music blogs.   Of course, it helps that they are beautifully Swedish (but cunningly surf through the Australian summers to escape the Nordic winters). Either way, the hotel crowd loved their slightly sleepy, melancholy tunes. 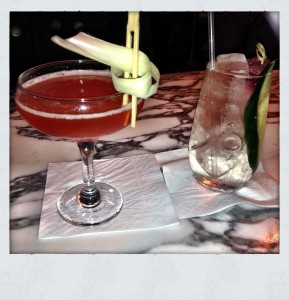 cocktails at the Sanderson hotel

Needless to say, the Sanderson’s colourful cocktails added the real vibrancy to what was a pretty monochrome evening.