The Hippodrome Casino: the Ex opens the door that never shuts

It was the London-loving girl in me making me giddy with excitement last night.  After 30 months of rebuild and a mere £40m renovation, I was to visit the recently reopened 112- year-old Hippodrome in Leicester Square.   It’s hard to believe that so much talent, from Charlie Chaplin and Judy Garland to Stevie Wonder, has performed in this impressive London landmark over the last century.

As is often the case with early-door access, it is not what you know but who you know that opens doors.  And the entrance to this five floor mecca, which will host London’s first casino, cabaret, dining and drinking establishment, has been opened for me by the Ex.  Having cut his teeth on The Chicago Rib Shack, Tiger Tiger and Salsa!, the Ex is now a rather important Director of European Operations for The ONE Group, the team responsible for all the hospitality at the Hippodrome.   With limited pleading and begging (never a good move with an ex), He and I were joined by our Never-aging Northerners for an evening of food and flutter. 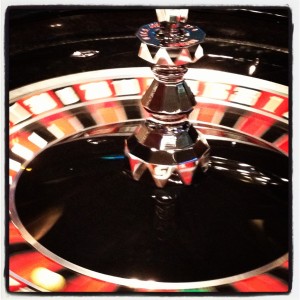 having a flutter after our food

It is hard to believe that when this grade II listed building first opened in 1900, you would find polar bears and sea lions swimming in a 100,000 gallon tank as part of a circus act.  The main casino now sits in this atrium and, 24 hours a day, anyone (over the age of 21) can walk in off the street to gamble.

We ate at the Heliot Restaurant which, complete with Tom Dixon lighting in its rather swish lounge and bar, I am sure will attract the glamorous set.  Inspired by a famous lion tamer, Claire Heliot, who regularly performed at the venue in the early 19th Century, the restaurant is on the first floor and so gives diners a great view of the spinning roulettes below.    Reaching for the cocktail menu, I read that the Hippodrome pays serious homage to the quintessentially British G&T, so I felt compelled to try Jimmy’s London Thing (Tanqueray, elderflower cordial with cranberry juice & soda £8.50) and almost didn’t need another.

As the menu at Heliot is extensive, we were keen to try as many of the dishes as possible. To start, we dipped into vine tomato gazpacho (£8), tuna tataki with Asian apple and herb salad (£8.50) and the chilli salt squid (£8.80).  The soup was unfortunately mid-defrost but the tuna and squid were both delicious.  I opted for the herb salted roast chicken with sage and apricot stuffing (£32 to share) for my main course.  It wasn’t dreadful but it certainly was not overwhelming either.  However, the sides dishes, sautéed spinach and cauliflower gratin (both £4), were absolutely delicious.  And when we asked our waiter to surprise us for desert, there was little Summer Pudding and Clotted Cream (£6.50) and Chocolate Mousse and Brownie (£7.50) left on our clean plates. 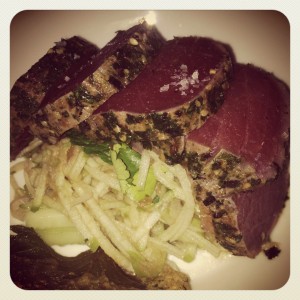 tuna tataki at the Heliot Restaurant

To walk off our dinner, the very helpful PR took us on a tour of the 90,000 sq ft playground for grown-ups.  Complete with its 180-seat Matcham Room theatre, cigar terrace, five bars, restaurant, private dinning rooms and three floors of gaming, it is fair to say that the Hippodrome is mind-blowingly impressive.  The food isn’t quite spot on yet (but it’s early days) and I have mixed views on such accessible gambling, but I’m pretty sure this time the iconic entertainment destination will come out on top.