A rainy Regents Park saw the first (public) day of Frieze’s 10th London fair.  Although recognised as the city’s most influential contemporary art fair, there is always a strong international element to the event, both in the focus of the exhibits as well as the purchasing wallets.

And it seems that Amanda Sharp and Matthew Slotover, co-directors of Frieze, felt that exporting their concept to NYC wasn’t enough of a challenge for 2012.  So, they have launched Frieze Masters, a simultaneous fair on the other side of the park.

I wondered how much of this staged cultural entertainment is about making contemporary (or less contemporary )art accessible or whether the long queue snaking outside in the pouring rain was full of bulging wallets?

Inquisitive enough not to be put off by the rain, I grabbed my brolly and headed out for Regents Park to find out. 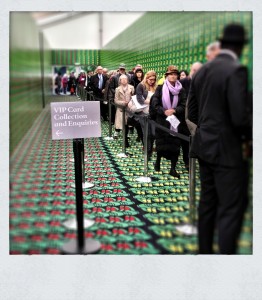 Any visitor to this year’s fair cannot fail to acknowledge the German artist, Thomas Bayrle. He has been singled out by Frieze as their 2012 artist and his work lines the entrance tunnel into the exhibition.  I was curious to know more about his rather unique, slightly oppressive patterned masterpieces and discovered, unsurprising, that his art is a direct result of his years spent working in a textile factory. 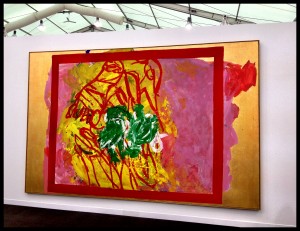 Georg Baselitz’s, Stilleben Still, next caught my eye.  Another German artist in his 70s but one who, unusually, paints his subjects upside down.  Retailing at a mere £528, I was pleased to note the large canvas’ commercial as well as dramatic appeal.

I dug deep into the fair to find something less hung and more ironic.  And I found Hasson Sharif’s Jelly Fish. 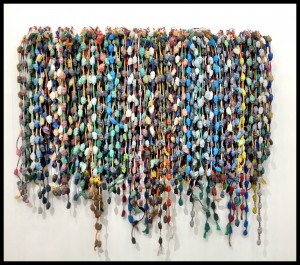 Colourful yes, original certainly – but worth EUR 35 million?  I was told it had just been sold to an undisclosed buyer.

The next challenge I set myself was to find some useful art.  ie art which doubles up as something useful.   This GET/GIVE bookshelf won my award but, priced at EUR 32,0oo it suddenly became an awful lot less handy. 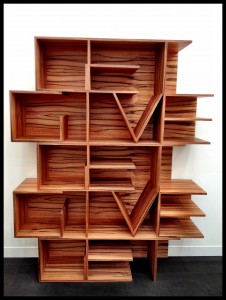 Winning all prizes for ‘not useful and not really art at all’ was the stone shattering glass exhibit. 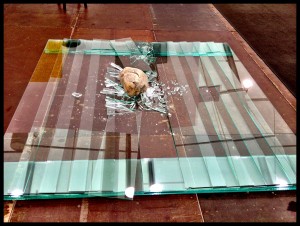 All in all, and casting aside my personal art challenges, the fair was not a disappointment.   It was full of unusual, creative pieces which certainly thought-provoked.  Now, you can’t put a price on that.