mascots over the rainbow

Smaller version of Him has been talking about ‘mascots over the rainbow’ for weeks.  Having no idea what he has been referring to (and based on the fact that he is often talking about his imaginary friends and life in his very own private world) we have smiled politely.  Now we get it; Wenlock and Mandeville are the London 2012 Olympic mascots. We have just sat down to watch Michael Morpurgo’s charming 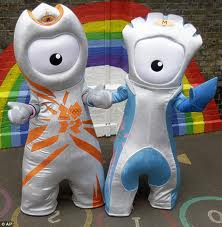 5 minute screenplay.  The promotional film tells how these funny looking creatures were made from left over droplets of the steel used to build the Olympic stadium.  Very cute and very clearly aimed at exciting the kids about the Olympics.  Just watch out for the pester power.