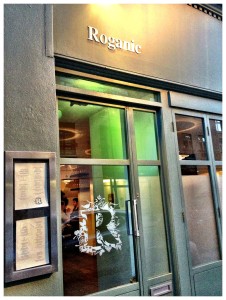 I have a feeling that this review will be more about tasting menus than specifically about my trip to Marylebone’s pop-up restaurant, Roganic.  The thing is that I’m not sure that I’m a taster.  I’m more of a scoffer and, while the little tastes of food do interest me, they also make me confused, disappointed, slightly hungry and definitely nauseous. 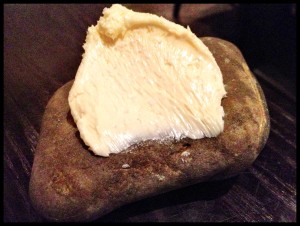 homemade butter on a stone

But I had thought Simon Rogan’s organic food (said fast too many times gives you Roganic) would prove different.  The tiny restaurant (it only seats 24) has been cleverly promoted as a pop-up (although a long pop-up as May will be the end of the 2nd year) and has been on my list of can’t-get-a-table for a while.  I plumped for the Tuesday after Easter Monday (when nobody wants to eat) and finally netted a table for 2.

Food choosing is easy; it’s quite simply the 6 course menu (£55) or the 10 course one (£80).  Which was convenient actually as my guest had just resigned from her big corporate job so we had lots to discuss.  I’ve worked out that a mum is NEVER happy.  Those who don’t work crave the freedom an office offers and those who do work crave school pick-up with chocolate biscuits.  So the best advice anyone can give an unfulfilled or over-worked mum is to flit in between work and no work.  And this friend is currently flitting. 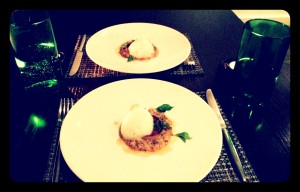 I have to admit that the team at Roganic know their stuff.  All Michelin trained, Simon has made no mistake in choosing his front of house staff for his first restaurant outside of The Lake District.  As they serve, their descriptions almost sounded as if they had made each and every dish with their own fair hands.

We began our 6 course feast with a breadcrumbed eel.  Closely followed by freshly baked bread and homemade butter on a stone.  And then the 5 courses of mushroom cake, swede dumplings in vegetable broth, millet pudding, lemon sole and roast duck merged into one.  Plate after plate of beautiful morsels.  Some delicious some less so but all nevertheless a creation from the art studio downstairs (namely the kitchen). 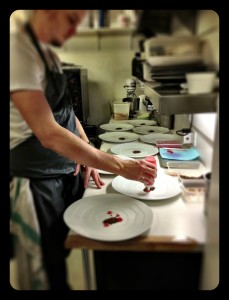 Desert was ‘forced rhubarb’ with honeycomb and gingerbread and, despite being a large rhubarb fan, I didn’t for force myself to consume it.  I was full.  Full of artwork and suddenly feeling a little uncomfortable.

Glancing around the restaurant I wondered how long these (and previous diners) had waited to get a table.  And then I noticed how much they all seemed to be savouring every mouthful of what is considered to be ‘the best of British ingredients’ .  It was as if they had swallowed the hype – without even chewing it.  The same way the Emperor had loved his new clothes.  So I will admit that Roganic’s food is much more artistic than the Emperor’s New Clothes but less enjoyable than seeing him parade around the town stark naked.