Small Apartments: a film review by Him 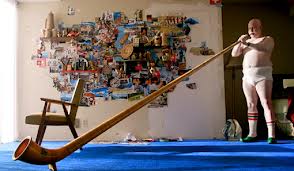 Matt Lucas with the horn

It had been a Monday afternoon. In a jacuzzi. With a fat, bald, gay bloke. Probably not exactly an image I would choose to recall as your typical alpha male.  Anyway, those were my flashbacks as I sat down to watch a VIP screening of Matt Lucas’ film, Small Apartments – as I had been asked to deputise for the wife, the blogger, due to my passion for comedy. It had been more than a decade ago when this Shooting Star drummer and I found ourselves chilling together in the more relaxing confines of an upmarket North London gym, mostly populated by preening ladies-that-have-just-lunched, bored personal trainers and random punters who could somehow afford to while away the afternoon on a treadmill. 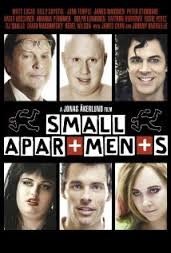 Lucas’ bid to break the US

In fact both Lucas and I were in between jobs. I had just escaped the clutches of an all-encompassing banking powerhouse, whilst Matt was about to springboard into mainstream success on both sides of the Atlantic with the legendary Little Britain series.

So, as I settled into my comfy seat at the Soho Screening Rooms, flashbacks of Matt Lucas’ pasty bulk were replicated on camera by the unnervingly simple and eccentric pants-only wearing, Switzerland-obsessed loner, Franklin Franklin.  And as he blew on his beloved giant alpine horn, I soon realised that ‘Small Apartments’ as a whole is a simply a direct reflection of this unusual character.

Despite a star-studded cast, this is a story of impoverished oddball characters worrying about a missing landlord but desperately lacks laughs.  Weaved together by former music director Jonas Akerlund, I very much doubt Messrs Altman, Soderbergh and Tarantino will be quaking in their Crocs quite yet!

Yet (and pardon the pun Mr Akerlund), whilst Lucas is no Madonna, the one ray of light is his literal and figurative stab at his first Hollywood lead. Therefore, one would be hard pressed to call it this a rich comedy, despite the occasional lighter moments delivered by Billy Crystal, James Caan, Jonny Knoxville and Dolph Lundgren. 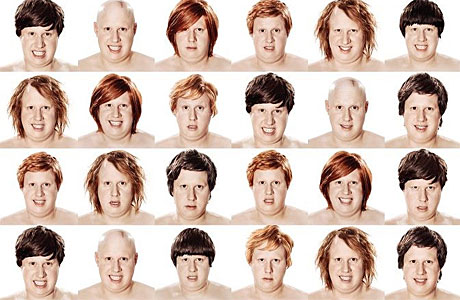 the faces of Matt Lucas

In short, the cast looked like they were having slightly more fun than the audience. This was ironically summed up by Franklin’s brother just before the closing credits, “Happiness is a state of mind”. However, for me, that state of mind was quickly reached by the post-film glass of wine with my attractive new media darlings, the thought of attending this weekend’s top-of-the-table rugby clash at The Allianz Stadium and a decent night’s kip, before returning to the day job!