Where (Mexican) angels fear to tread…

In need of a spontaneous night out with house-building girlfriend, we headed against the Olympic traffic into Soho.    One of the newest additions to the Soho food scene is Will Ricker’s La Bodega Negra.  The sex shop facade of the restaurant has been splashed across many a tabloid as it is frequented by the very-It crowd.

Around the back of the more exclusive (and expensive) restaurant, we found La Bodega Negra’s 60-seater café on Moor St.  With black and white chequered floor, retro dining booths and a strong Mexican vibe, girlfriend and I immediately felt we could have been transported to Brooklyn, New York.

We perched up at the bar and immediately made friends with our barman.  He explained that there was a 40 minute delay for the food but clearly no such delay for the frozen margaritas and tostada (which just means tortilla chips) with guacamole (£3). 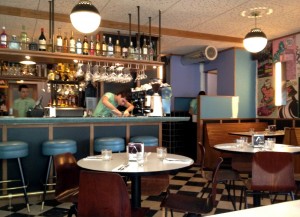 the coolest cafe in town

We ordered a couple of tacos (seared steak and mushroom with spinach / 3 in an order/£6),  a citrus and garlic marinated salmon tostadita (£4) and a Guadalajara salad (Mexican cheese, caramalised pecans, pomegranate £10.50).  Only the salmon was rejected as it simply tasted wrong.  The salad was probably our favourite plate, but we did comment that it seems a little pricey.

It struck me that tacos, and in fact all Mexican food, are tricky to get perfectly right.  And this might be why London, in comparison with New York, seems so under-served for posh Mexican joints.   However, the atmosphere is more than zingy.  It’s cool and happening and exactly where you want to be on a night out.

As the night wasn’t properly planned, we felt we were quite within our rights to hop down from the bar stools and head elsewhere for our desert.   Gelupo, frightening close to Piccadilly Circus, sells probably the best ice cream in London.  An offspring of the Italian restaurant Bocca di Lupo, I am told that this small shop has a permanent queue winding out of the door and down Acher St. 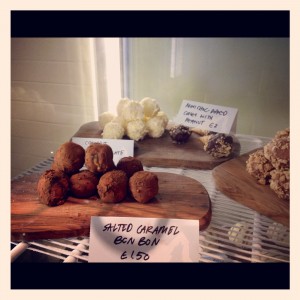 Afflicted with a current obsession with salted caramel, I choose a salted caramel bon bon (£1.50) while girlfriend had a small tub of blood orange sorbet with mint chocolate chip (£3).  Again, we are a little behind New York, this time in the frozen stakes.  But Gelupo is certainly helping to drive the ice cream revolution forward.