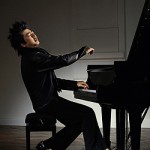 After almost 30 years of piano abstinence, I now sit through Mini-Me’s lessons and, for this reason alone, I have been re-bitten by the bug.  Clearly, my output is not at all audience-worthy but, in comparison with looming copy deadlines, small people’s homework and client online media strategies, I find playing the piano, however badly, a marvellously relaxing activity.

The jury seems to be utterly divided when it comes to showman pianist, Lang Lang.  Those that adore him can’t seem to get enough and others find his extrovert manner and look-at-me keyboard antics to be insufferable.  Clearly the former category is numerous as last night the Royal Albert Hall was yet again a sell-out, the second of three nights of his Beethoven Concerto Cycle accompanied by the Philharmonia orchestra. In search of further inspiration as well as curiosity, I joined the ‘Lang fans’ for a classical yet dramatic performance.

The man is quite possibly living in a parallel universe.  I felt convinced that he was intoxicated by the music and seemed almost surprised to see us all sitting there when he was released from his trance by our applause.  I must confess that my intricate knowledge of Beethoven’s work is lacking so, in an ignorantly blissful way, I will never know how much of the tempo was adulterated by Lang Lang.  For me, his performance was simply magical.

As he was expelled by his piano teacher for lack of talent at the age of nine, Lang Lang has had a lot to prove.  Practicing eight hours a day, it has now paid off as, aged almost 30, he is a world famous phenomenon having played for President Obama at the White House and before a global audience of billions at the opening of the Beijing Olympic Games in 2008.  I doubt his approach will ever be fully appreciated by the die-hard classical music lovers but for an uneducated ear like mine, I admit I enjoyed the drama.