battle of the blondes 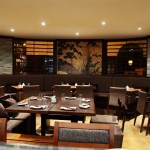 I should be clear that my visit to Chisou (with my very own blonde) occurred on the day after Mr AA Gill’s less-than positive review of the restaurant had appeared in Sunday Times Style. Seeing as Chisou’s sister restaurant in Mayfair has an excellent reputation, I expected to uncover a Chiswick equivalent. Instead I found a team of quivering wrecks and hurt faces. As you would expect, the Japanese culture would take a negative review very badly. I somehow felt it was my duty to undo any ignorant wrong doing and, as a real lover of Japanese cuisine, give Chisou a fair review.