are THEY our future?

I’m generally an optimistic person. I tend to believe that everything will work out for the best unless the evidence is overwhelmingly to the contrary. But some of the ‘modern parenting’ I have witnessed recently is seriously alarming me, and could even suggest a proper crisis on our hands. 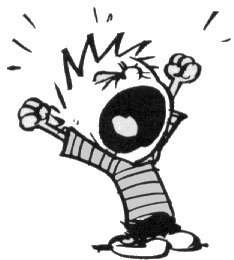 I think most of it boils down to a parenting fear of offspring. The mother who turns up at the school gates with a choice of snack, unsure which one little Peter might want after his long, trying day. I watched as Peter reprimanded his mother. Both sugary alternatives were wrong. She lowered her head, apologizing to this 6 year old tyrant.

The bar is continually lowered, when the brats misbehave. Whether it’s a public outburst or private surliness, the adults shrug their shoulders as if to say, ‘That’s kids for you!’ But of course it doesn’t have to be. These minors need manners and a little self-control, basically nothing a table clearing, bed making or even car cleaning couldn’t sort out. The only reason they tantrum (past the age of 3) is because they are being allowed to.

Before I appear smug, mum-know-it-all and horribly preachy, one final example of this certain tribe of the next generation. In the playground last week, one of (9 year old) Small’s friends was slapped across the face by a boy 3 years his junior. The incident was completely unprovoked and a shock to the older boys.   However much the authorities tried to ensure this boy apologized, he failed. Is this normal? At all acceptable? Simply an attention-seeking ploy? I have no idea any more but, at the every least, seems to me to be a worrying sign of the times.