The BFI London Film Festival has spoilt me rotten this week.  Ben Affleck and I enjoyed his new film Argo (he is both director and protagonist) at the Wednesday night Leicester Square premiere.  As he didn’t have kids’ homework and tea to organise before belting it to the W Hotel’s Wyld Bar in time for a quick pre-screening cocktail, he was a little ahead of me on the red carpet. 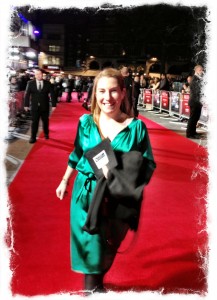 Delighted to be dressed by the fashionista, Fleur Bird (founder and owner of the fabulous Fleur B boutiques – more of which in another post), I had flung on her beautiful emerald green foundation silk dress in a matter of seconds.

And, against all odds, @BlameLex and I were sitting comfortably in time to hear Ben’s intro to his third directorial, this much-anticipated true-story hostage mission.  In fact, that description hardly does this powerful film justice.  Upon reading the script for the first time the actor-director said that he thought: ‘This is insane, it can’t be true. Then I went on the internet and looked it up and found out it really happened so I called up and said, ”I want to make this movie.”’

The film opens with militants storming the US embassy in 1979 Iran.  It’s messy, violent and unpleasant to watch.   Six embassy workers manage to slip out of the back door and find temporary refuge in the Canadian ambassador’s home.  The clock is ticking and they are screaming out to be rescued by CIA ‘exfiltration’ specialist Tony Mendez ( Mr Ben Affleck).  His plan is crazy, his facial hair long but his execution and delivery first class. 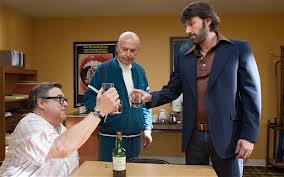 Affleck, Goodman and Arkin in Argo

A strong Oscar contender, Argo is must see for those who love thrillers, rescue missions and Mr Affleck.  We headed at break neck speed (also on a mission) to the Sanderson Hotel to meet the actor-director in person.  A rocking DJ, serious cocktails and some great company finished that evening off.

Last night, this time accompanied by @ladylala and a couple of Hims, we saw the novel-turned-film, The Reluctant Fundamentalist.  Mira Nair’s story of an idealist torn between Islamic radicalism and American capitalism is, for the most part, grippingly portrayed.  The story unravels as Changez (Riz Ahmed), a Pakistani anti-America professor at the University of Lahore, is being questioned by a US journalist in connection with the recent kidnapping of a US academic.  His life story, shown in flashbacks, sheds some light on his fundamental struggle in the Western world at the time of the 9/11 tragedy. 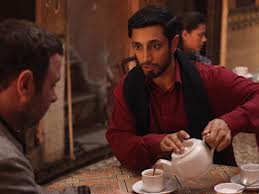 The story itself, of an idealist reluctantly torn apart by different cultures, is probably more interesting than the slightly inaccurate portrayal of both countries’ fundamental failures. However, it’s an enlightening film with some powerful scenes of troubled Pakistan.

And, to complete London’s week of film, we dropped into the after-party for Brett Morgen’s much-anticipated Rolling Stones documentary Crossfire Hurricane – hosted at a somewhat-tired looking Quaglino’s, SW1. A clever choice of venue, I thought;  as the restaurant first opened its doors on Bury Street in 1929, it made the Rolling Stones appear pretty youthful…