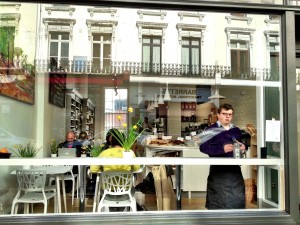 Ben in the window of his Black Truffle

Temporarily, in my head, I am Carrie Bradshaw.  Sometimes, a bit more than temporarily.  I mean, I certainly don’t have the shoe closet she boasts nor do I quite view the oven as additional storage space, but I really would wear a tutu if I didn’t think you might all die laughing. 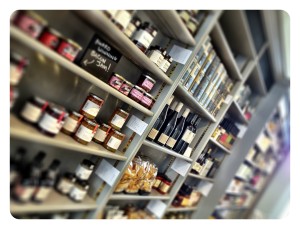 deli and coffeehouse on England’s Lane

So, in a Carrie Bradshaw moment last week, I decided that My Editor (of North West Resident – of course) and I should meet for a powwow over a coffee. And, seeing as the Black Truffle (41 England’s Lane) is the new deli/coffeeshop on our patch, this would make as good a venue as any.

Ben O’Toole, the owner, is also a local.  Living on Lambolle Road, he is a broker turned foodie.  But, what is HSBC’s loss could well be our gain – as many of us are still mourning the gaping hole left by England’s Lane Bookshop’s depressing departure.  Anyway, I popped along a little earlier than I had arranged to meet My Editor so that I could chat to Ben about his cake baking, deli stocking and coffee-making plans. 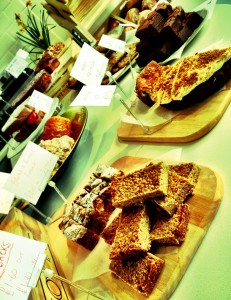 Originally a northerner from Leeds, Ben had grown tired of banking within the hospitality sector and, after gaining a diploma from Tante Marie, decided (rather bravely) to take a stage at Claridges.  And now, he knows it all. 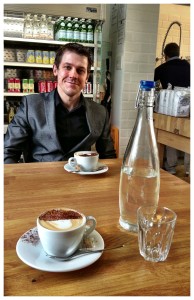 Maisie, the ex-Damson chef, is downstairs working on some pretty mean pastries, cakes, soda bread and sandwiches.  The walls are lined with truffle oils, keenly selected wines, dried porchini mushrooms, fresh loaves (from The Flour Station) as well as basics such as farm eggs, the finest butter and pints of organic milk.  Ben’s idea is that you might stop in to grab what you need for dinner that night – as well as a (Climpson) coffee for now – and avoid the long queues across the road at less-fun Tesco. 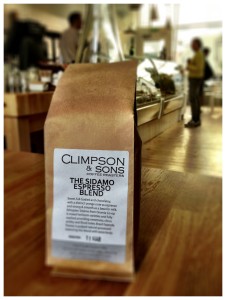 There are only a handful of tables.  But that’s no accident either.  Ben wants his Black Truffle to be more of deli than a sit-in all day café.

My Editor and I were impressed.  While we enjoyed our strong cappuccinos, we gossiped about who’s been up to what and with whom.  And then made some plans which those who live locally will read about sometime soon…