Yesterday was more of a marathon than a sprint.  Leaving home at the crack of dawn, we headed for the Duke of Beford’s back garden (ie Woburn Abbey) with a car load of Smalls and their bikes/scooters/helmets and a big picnic.

As Queen Tweeter for the 2012 www.triforlife.co.uk actual day and having been a member of the online marketing team for the last 3 years, it was clear that this year’s event was going to blow previous years out of the water (no pun intended). 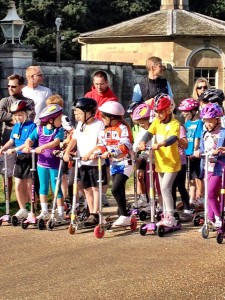 With three different triathlon distances, a 10k run, a kids scootathlon and a kids duathlon – there was little excuse not to partake.  He and I chose the 10k run while the Smalls took part in their age appropriate scootathlon. 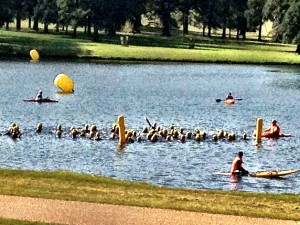 In the lake at Woburn Abbey, the triathletes are ready to go

Unlike many other triathlon events, tri for life insists that every single entrant needs to raise sponsorship for the 4 pre-selected charities.  And, while the pennies are still being counted, I already know that the passionate team behind this 5th tri for life, have taken the amount raised to date over the £1.1m mark.  No mean feat.

The 10k felt good.  It was hot and the hills were hard but it felt good.  Determined not to stop, I thought of the kids at Whizz-Kidz, the breast cancer sufferers at Breakthrough, the hope given by Rays of Sunshine and the magic performed at Great Ormond Street. 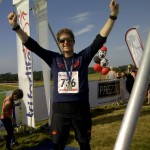 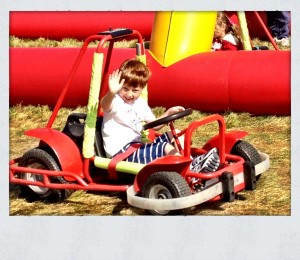 Small waves from the go-kart

The Smalls too felt that it was not only the wall climbing, go-karts and bouncy castles that made the family day such a success – they too had realised how wonderful it feels to exert yourself while raising some serious cash for those in need.

Back in London, the iTunes Festival at the Roundhouse (Chalk Farm) beckoned.  Clearly my limbs were saying no but my head was certainly saying a big yes to Calvin Harris and David Guetta on the decks.

Music friend and I agreed that Harris stole our hearts.  The 28 year Scottish artist, producer and remixer had the 3,300 capacity packed full of ‘bouncers’ with their arms above their heads. 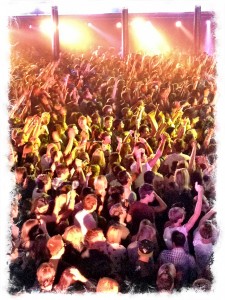 The tunes with neon light show (and added glitter / dry ice fountains) were the hero of the show as Harris is dead pan and calm in his execution.  Too many DJs are all about their show and this dude is all about the music.

tri for life 2013 will be at Woburn Abbey next September AND there will also be a running festival earlier in the year.

Filed under health and fitness, him, kids, life, music