The Aubin Cinema in Shoreditch

I was having a coffee with a friend last week.  She confessed that she does in fact read my blog.  Well, it wasn’t so much of a confession but a “I promise I do’ type of statement.  Her real confession was that she prefers my negative posts.  You know, the ones where I pick fault and get all-in-a-rage about silly things that have bothered me.  Except that I don’t do this often enough – according to my friend. 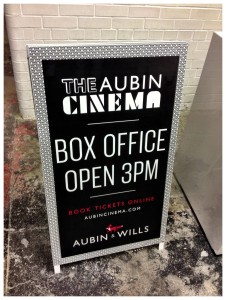 And she’s not the first to plead with me to tear strips off a product, service or meal.  It seems that there’s a fair few of you who want to hear the worst reported.

But last night was date night so I wasn’t on the look-0ut for anything remotely bad.  And, as the whining came from the Smalls, we exited extraordinarily early – nothing to do with a long bank holiday weekend spent playing too many board (literally) games….

By 630pm, we were in another world.  The Shoreditch world of cool.  The Aubin Cinema, part of the first Aubin & Wills destination store, is run in conjunction with Shoreditch House private members’ club.   The 45 seater cinema is plush.  Imagine the luxury of West London’s Electric Cinema but plusher, I reckon.  And the seats are, of course, plumped up with Aubin & Wills cushions.  “Great branding,” He whispered as the film began.  “Would be,” I responded “if Aubin & Wills hadn’t gone bust!”  (Jack Wills ditched its sister brand at the end of last year). 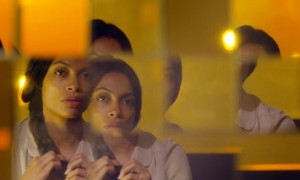 Danny Boyle’s Trance is going to be a challenging film to attack.  Peter Bradshaw (from The Guardian) says that the movie tries too hard and that the plots just aren’t exciting.  I strongly disagree with him.  This is a psychological art heist thriller centred around our mysterious minds.  In short, a £25m Goya is stolen from a London auction house. Simon (James McAvoy), an auctioneer and art connoisseur, who happens to be a gambling addict, is our inside man.  However, during the robbery, he is hit over the head by an accomplice (Vincent Cassel).  Amnesia sets in and then he can’t remember where he’s hidden the painting. Enter a drop-dead-beautiful (not to say mesmerizing) Harley Street hypnotherapist (Rosario Dawson), who is brought in to sort things out.  However, she just complicates EVERYTHING! 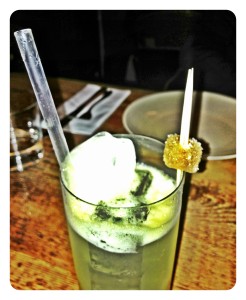 my cocktail, a Presbytarian at Clove Club

Buzzing from our ‘who knew what at which point’ questions, He and I walked a block to The Clove Club for some refreshments.  A small (nb this is crucial for later developments) glass of Trinch 2008 red for Him and a Presbyterian (Ritten House, Lime, Ginger and Soda £8) for me as we chilled out in The Clove’s bar area.  Dinner in the proper dinning room is £47 a head for the set menu which seemed a little steep and anyway, the small plates (£5-£13) of mackerel, rhubarb and turnip, buttermilk fried chicken, spiky artichokes in lime and duck egg with Jerusalem artichokes were just what we fancied.  (He just ordered doubles of His favourites when I was full and needed man-size portions.)

the bar at The Clove Club, Shoreditch

And now I need to say something awful about The Clove Club.  But I can’t.  The team is hip, the interior is simple-Edwardian, the food is unbelievably good and it’s in Shoreditch’s historic Town Hall.  I mean, how on earth did they pull that off?  It’s Boyle-cool all over again. 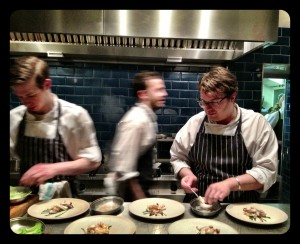 Chef Isaac McHale (right) at The Clove Club is one of the Young Turks. 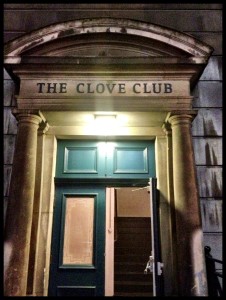 The Clove Club is in Shoreditch Town Hall

So apologies, if you want me to write something damning, I just CAN’T. Maybe don’t let me choose my destination and send me somewhere awful instead?

Oh hang on. Something curious did happen on the way home.  A blue flashing light stopped us.  To be honest, I was chatting away (while also instagramming) so didn’t even notice the siren at first.  He did – looking bemused.

I looked blankly at him.

‘Well, what do you think you have done wrong?”

More blank looks and 1000 apologies for whatever it was.

Turns out He had turned right at a no right turn.

Reaching for his breathalyzer, he was interrupted by a call on his walkie talkie; some real criminals were causing havoc elsewhere.  We were cautioned and let off the fine.

Trance (15) is out in cinemas nationwide