cronut, duffin, dough-sant – what IS this current craze of hybrid pastries all about?

Relax.  I’m not going to spin you a tall story about any brand new kind of anything.  I just want to calmly and quietly examine the behaviour and attitude towards this sudden invasion of renamed pastries.  But, before I find myself knee-deep in sugar and dough, I feel I should add that this is not simply a UK issue but instead a global obsession which has, in short, made a mockery of the plain buttery croissant, France’s breakfast staple since 1869. 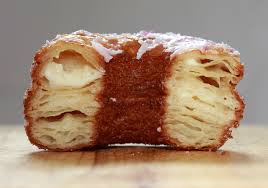 For those living under a (stick of) rock, let me explain.  Once upon a sugary time in a world where none of us ever questioned the light, fluffy croissant nor the sugar-high of the American doughnut, lived a chef called Dominique Ansel.  It seems that he quite fancied himself as a pastry inventor. While he experimented with combining the two carb-loaded treats, he created what he has called (and, by the way, no-one else is allowed to use his globally trademarked name) the Cronut™. His plan went well and, most days, the limited run of around 300 Cronuts cooked in his Manhattan bakery sell out within two hours of his doors opening, at 6am.  In fact, I hear that a queue of at least 50 Cronut hunters forms most mornings before his doors open.  This $5 croissant-donut hybrid could be considered no less than a hot commodity. 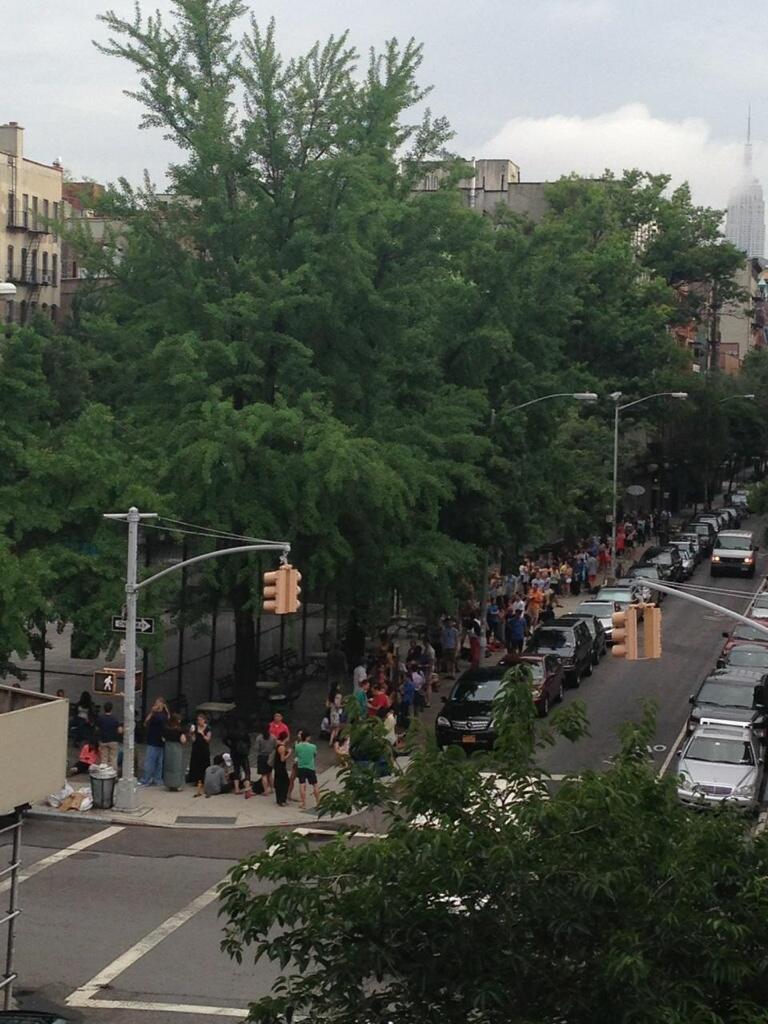 the queue for The Cronut

I was recently in New York but I had absolutely no urge to queue.  What I should have done was to head down to the bakery queue to find out why on earth anyone would WANT to wait in line at such an ungodly hour.  Is it the novelty, the limited bake run, the sugar-powered marketing, the deep-fried challenge or the post purchase claim that is driving these sweet-toothed, cool-hunter New Yorkers?   Just using my primary school maths, I can estimate that a large number of them must be rising pre-dawn only to be turned away without a Cronut touching their lips.  Close enough to smell the sweet buns and yet so far from tasting Ansel’s creation, it feels like a sorry old tale.

And the pastry mash-up craze has not ended with this Stateside bakery either.  Over here in the UK, Starbucks is currently at the centre of a row with a small London bakery over the ‘Duffin’, this time a muffin and doughnut rehash.  Owner Bea Vo, of Bea’s of Bloomsbury, is the creator of this sticky, sugary treat.  A couple of years ago she experimented with a buttermilk and nutmeg batter which she then baked and stuffed with raspberry jam, before dipping it in melted butter and dusting with sugar. So you can imagine that she is not best pleased to find out that Starbucks has just started retailing its own version (also with raspberry jam) and, worse than this, has gone and trademarked the ludicrous name. Surely the international giant coffee chain has a large enough marketing team to dream up its own pastry ideas, rather than steal from independent cafes?  Bea Vo’s concept could have changed her life, whereas in the other cup, the watery coffee at Starbucks could never claim to change anyone’s existence.  The Duffin update, as of today, is that the baked controversy is still cooking in social media, where on Twitter it even has its own hashtag: #Duffingate 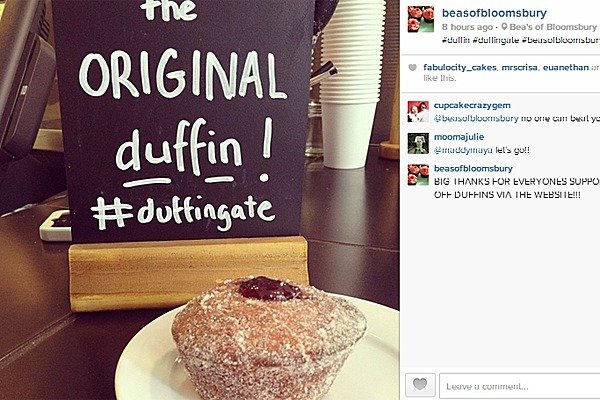 Curiously, in a world where the importance of our ‘5-a-day’ is drummed into us on a daily basis, these calorific buns are clearly raising our blood pressure.  But is this an unhealthy interest in something quite so sugary?  It appears that donuts and their derivatives are booming, with Krispy Kreme announcing a fattening 12.6% rise in sales in the UK this year.

As a keen marketer who appreciates challenging new ideas, I certain applaud the innovation and general buzz around any brand new product.  Driven by our word of mouth, the whole pastry hybrid outbreak is one which we love to chew over.  Friends have bought the Coco de Maya version (called the Cro-Dough £3.70) could not wait to inform me of, what is considered to be, cialis canada pharmacy the sweetest and most fancy of the bunch.  It seems that news of new pastries travels fast and furiously, and even Nigella Lawson boasts her own version of a sticky hybrid. 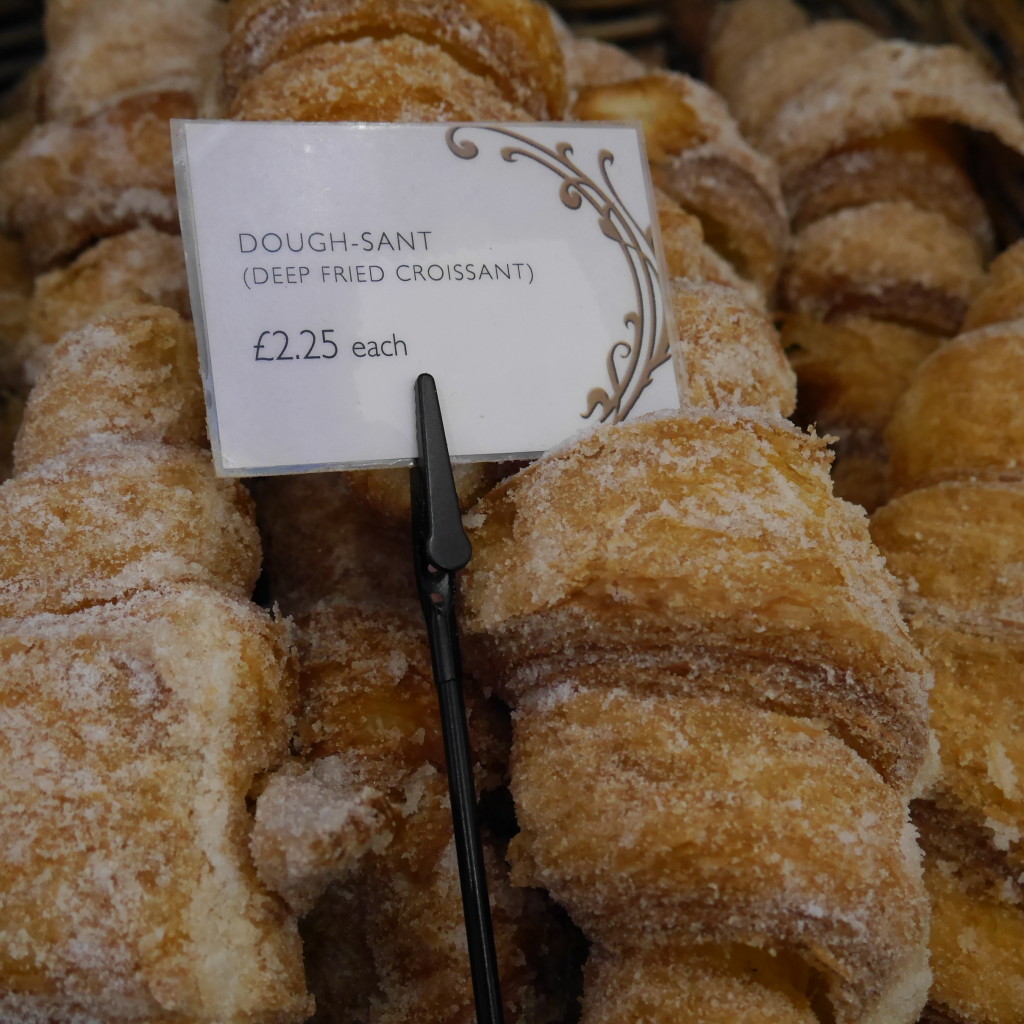 I suppose what is concerning me most is our intense reaction.  To want a Birkin handbag enough to join a 2-year wait list, to crave a table at the hottest new eatery so much that you shamelessly borrow someone else’s (famous) name or to queue pre-dawn for a pastry hybrid feels wrong and bad and totally inappropriate.  However the last laugh has to be from our New York baker.  His only dread must be that we all go cold turkey on sugar after Christmas as this might lead to his beloved Cronut having an even shorter shelf life …