Sharky & George have only been around for 10 years but they are already an institution for any parent who has a child/children needing entertainment.  When I first heard about the childish, ridiculously-energetic team they were based at Quo Vadis offering a party-like atmosphere downstairs so that a certain type of parent could eat their Sunday brunch in peace.  I wasn’t one of those parents – but only because it was fully booked for months on end.  Yes, Sharky & George were a MASSIVE hit from the outset. 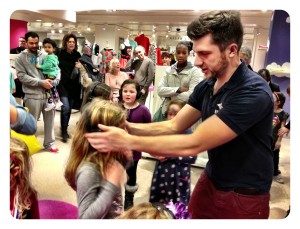 Three years ago, Small shared his 4th birthday party with a pal of his.  The other mother and I booked a couple of the team of ex-Eton boys to wear the pants off the 30 hooligans we’d invited. And it worked.  Thankful parents picked up their exhausted kids and then promptly booked the BIGGER boys for their forthcoming parties.

A month or so ago it was Selfridges’ turn. The marketing team there wanted a slice of the kiddie-loving action.   Except to tie in with their silent theme, the boys were booked for a silent disco in the kids’ department and I was dragged along by Mini who is always looking for a reason to dance.

And now I hear that the latest I hear is a book.  In fact THE book to get us Mums through a long not-so-hot summer.  It’s 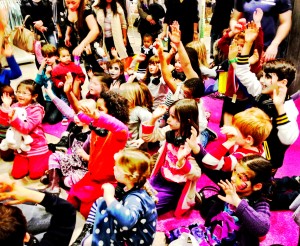 hands up baby hands up

called Don’t You Dare (£12.99 on sale 3rd June) and George sent me an advance copy for reveiw – of course, I can confirm it’s going to be a lifesaver.  While I had his attention, I dug a little:

firstly, how old are you and Sharky?  Both just turned 30!

when did the idea of being kids party entertainers first come to you?  And why?   We never really planned it, but after playing a water-based prank on our housemaster at school when we were 18, as ‘punishment’ he asked us to do 2 hours of games for his 6yr old daughter’s birthday party. She was scared of the local “funny man”, so we did the party as older brother figures rather than performers.

how many parties has the team now entertained?  6,250 so far!

how do you chill out after a particularly hectic party?  Eat some birthday cake, swim in a river, bob around in an inflatable dinghy (sometimes on the Serpentine….shhh) or lark around in the park.

where do your ideas for the kids come from?  Mainly our imagination with a lot of help from children at parties.

do you try ideas out on friends/family?  A bit, but it’s more fun to try them out in the office or at parties.

most ridiculous party ever?  I think it has to be either 600 children for an Alice and Wonderland themed Christmas party for an insurance company OR fourteen x 16 year olds for a secret agent themed whole day in London involving proper spy equipment, bugs and tracking devises, high speed ribs up The Thames, two helicopters, an elaborate kidnap and a chase ending in storming a Cold War bunker with paint ball guns to rescue the hostages. phew! 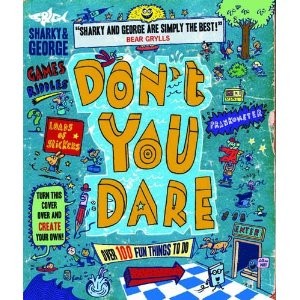 how many in your team now? 8 in the office and 80 in the party team

why a book now?  isn’t this selling all your ideas?  Why not! The book is not full of party games, it’s aimed at 6-12 yr olds and has a beach games chapter, woodland games, classroom games, fun stuff to do at school and highly mischievous pranks to play on your friends.

where do YOU like to party?  Sharky: in an après ski bar up the mountains in the alps  George: on the beach with a barbeque

who is your hero?  Sharky: my mum  George: Willy Wonka

what can we expect next?  Sharky & George clothing in the shops.

COMPETITION:  The terribly brilliant boys have also given me two copies of their book, Don’t You Dare, for the most deserving of parents!  For a chance to win all you have to do is ‘share’ this post on my Facebook page and follow me on twitter before Saturday 18th May 2013.  The lucky winners will be notified via twitter on 19th May.