Faking it. At Disney.

There is one Disney story you will have never seen.  It’s the fairytale about the mother who didn’t EVER want to go to the infamous Disney parks.  She couldn’t bear the very thought.   However, as you can imagine, her Him and her Smalls were not of the same opinion.  After some relentless pester power, the mother agreed to a 3-day trip on the simple basis that she would never return to ‘the magic’ again and… there was a chance she might earn her wings…. 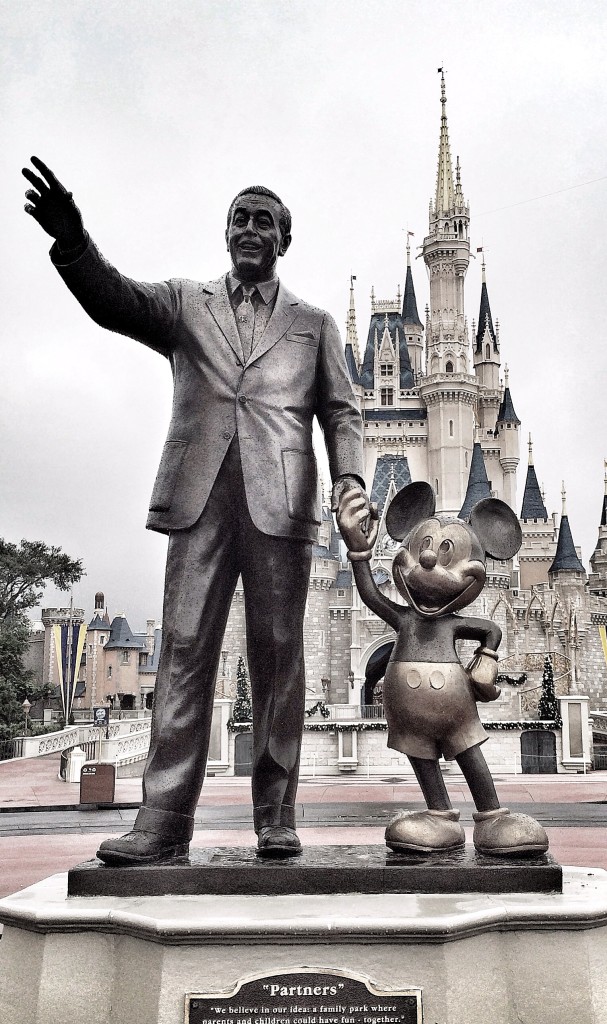 Walt and his Kingdom

I’m wondering how this blog post (which has been written and re-written numerous times over the last 3 days) will go down.  I mean, is writing anything at all negative about Disney World totally taboo?  Or is it ok to criticize the world of Mickey Mouse? Because – obviously – it’s ALL fantastic and as one of my readers mentioned ‘it’s the happiest place on earth’ but if my words aren’t 100% sugar coated, will I lynched by Walt’s mob?  Or maybe one of those really, really over-sized Disney parkers might sit on me and crush me to death?  Either way I predict a Disney riot as I post this – so please, please comment if you agree with any of my anti-cheese rant…

First though let’s start with the good stuff.  And – don’t get me wrong – some of it is REALLY good.  Amazing.  Brilliant. Quite literally mind-blowing.  We spent the first day in Magic Kingdom, the second at Epcot and the third and final day submersed in Hollywood Studios. 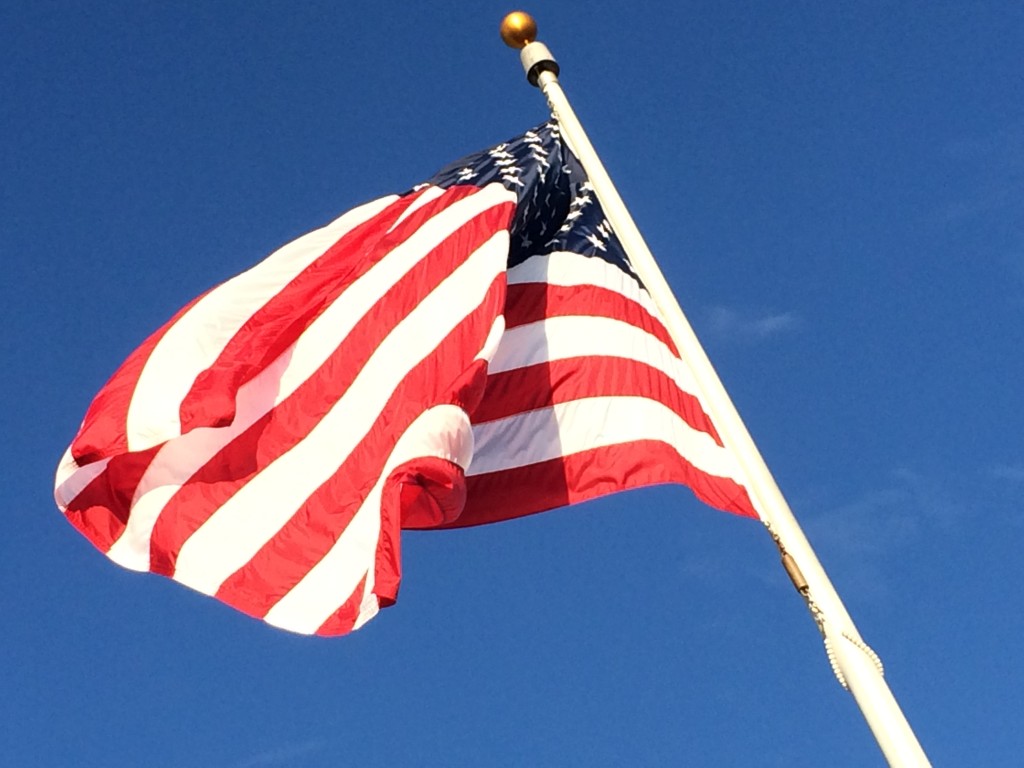 I must be honest (but PLEASE don’t let on to Him and the Smalls), after the first day, I was beside myself.  The Magic Kingdom is hateful.  Anywhere which tells me I need to ‘create some memories’ is wrong and bad. I also had zero interest in scary, upside-down, speed rides, those random park-goers and meeting Mickey Mouse in his changing room.  And I should mention at this point that we didn’t even ‘stand-in-line’.  He had arranged that, at a price, we would skip the 90 minute plus queues, Victoria Beckham style.  Our guide – one of the 16 maestros who work for Michael’s VIPs – deserves a blog post all to herself.  She was THAT magic. 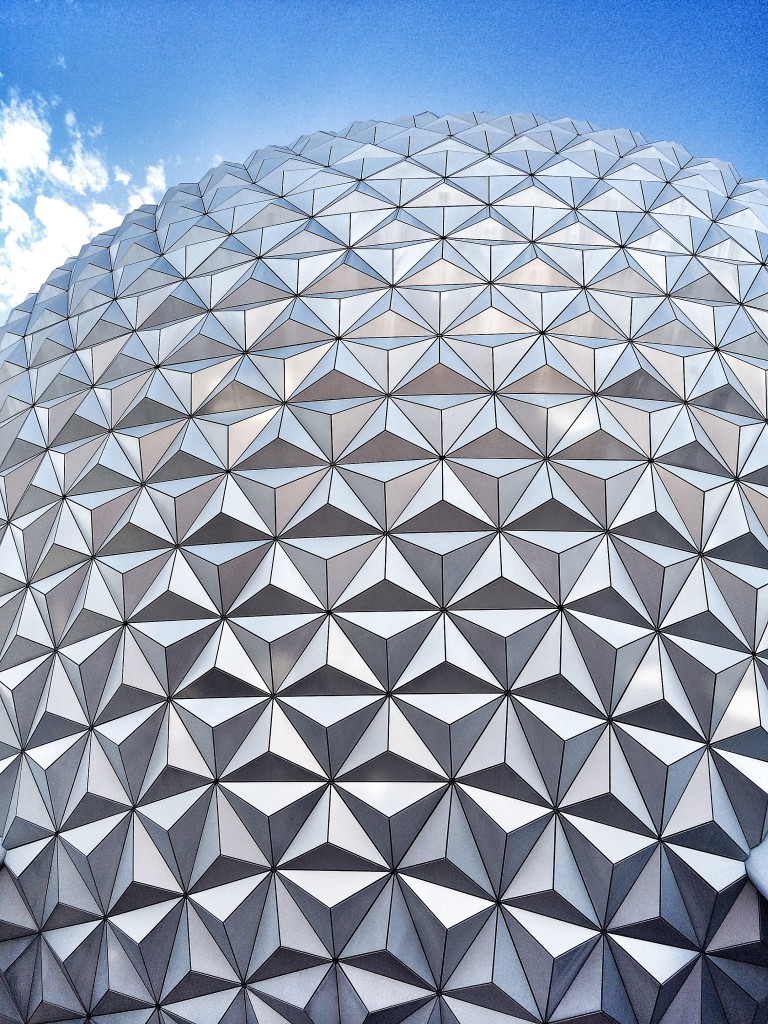 The second day things looked up a bit.  Epcot does its best to educate and inspire.  In Walt’s words: human achievements are celebrated through imagination, wonders of enterprise and concepts of a future that promises new and exciting benefits for all.  A little cheesy you might agree, but I definitely had less faking to do here.  Designing our own roller coasters and cars was amusing but the following simulation rides less so.  Next to the park, lining the large lagoon, is a ‘land’ for each of the eleven countries represented from around the world.  How desperately sad I thought… as someone explained to me how it allowed those Americans who don’t travel to see how other countries look. 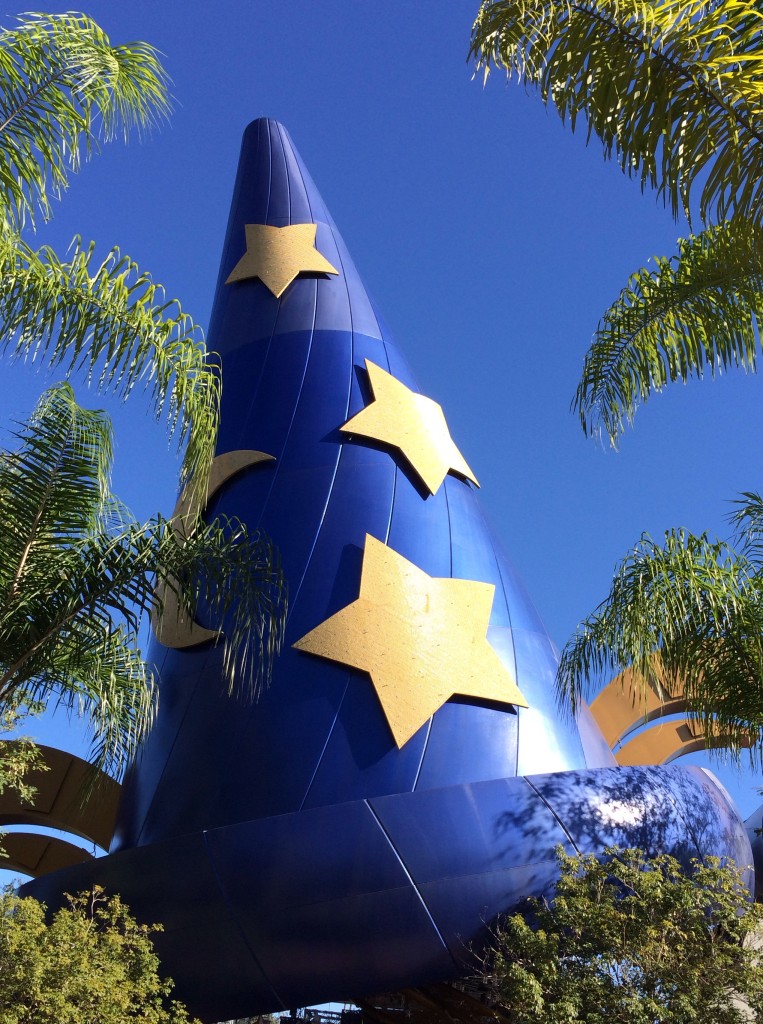 We finished the day early so we walked back to our hotel.  The Swan (twinned with the Dophin) is not classified as a Disney hotel but is located between The Magic Kingdom, Epcot and Hollywood Studios.  It is clean, comfortable, big (think aircraft hanger) and the service is impeccable.  Oh and TOTALLY soulless. 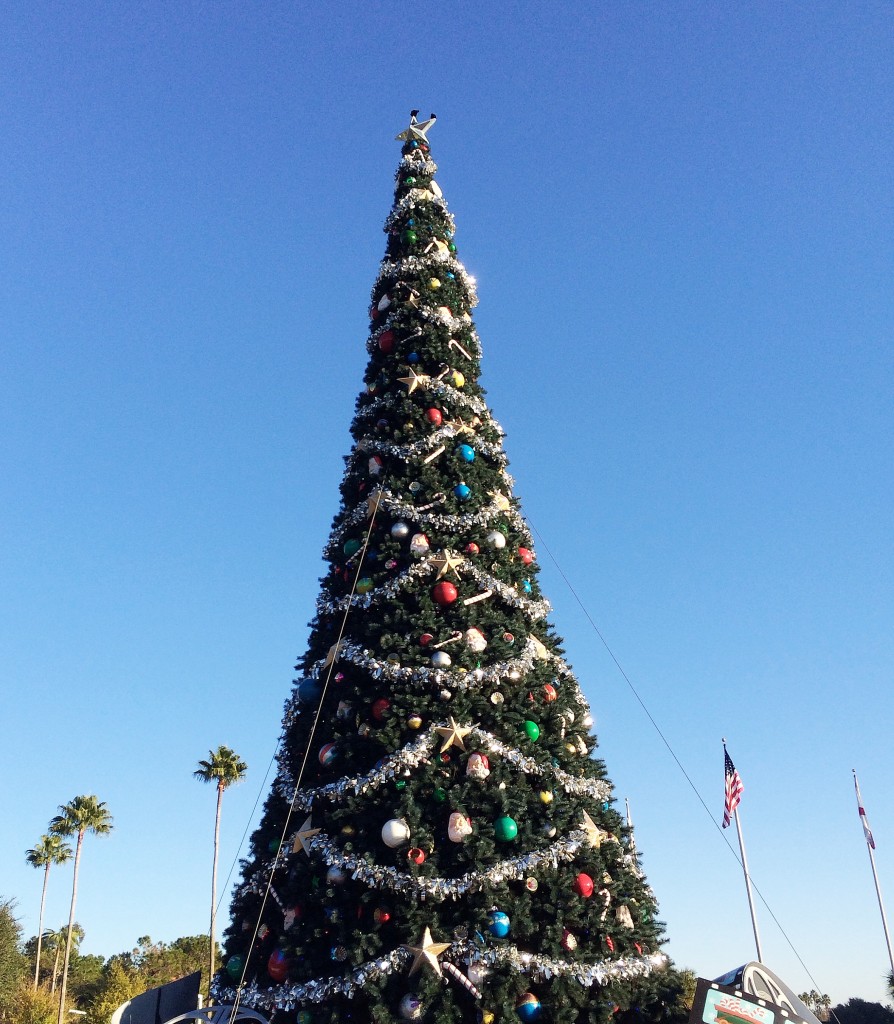 the Christmas tree outside Hollywood Studios

The final day we spent at Hollywood Studios.  As a film lover, I did indeed enjoy myself as we watched the Smalls train to be Jedis, Indiana Jones’ live stunts and a finale of the burning rubber cars stunt show.  Some of the other shows and attractions did grate so, as I sat reading my book outside the Muppet theatre, I wondered why I couldn’t admire the power of Disney brand for what it stands for.   Why do I SO object to be told how to feel (let’s celebrate they roared as we entered the park) and what is it about this cleverly fabricated world that makes me feel totally uncomfortable? 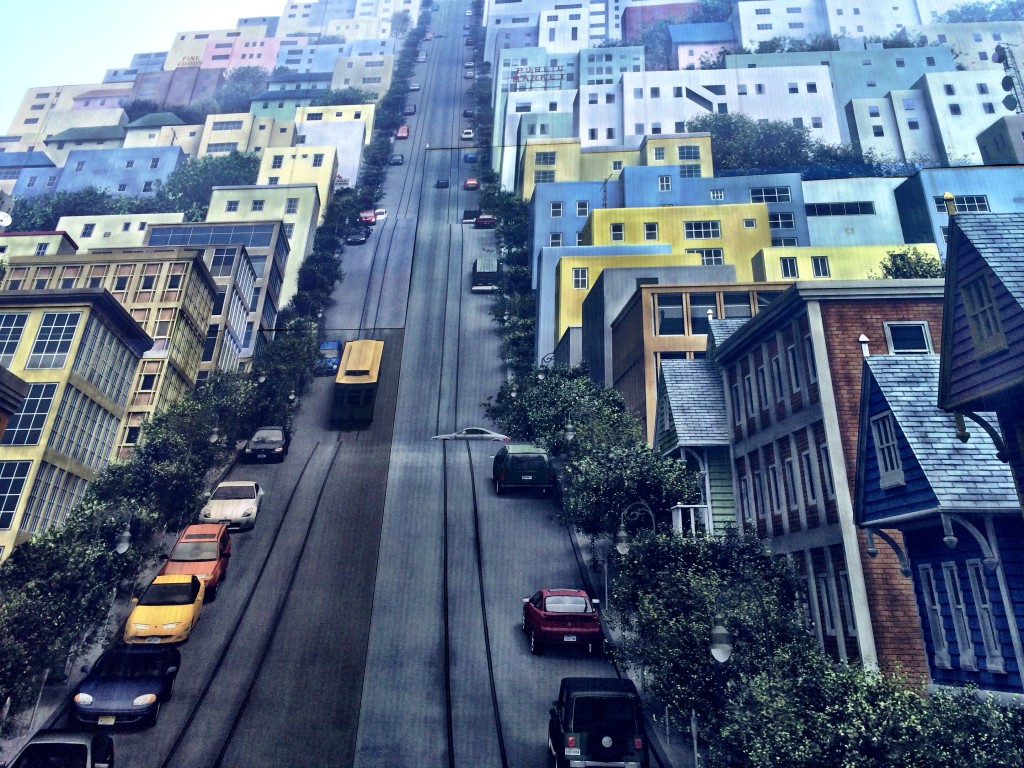 is that San Fran? or maybe not…

While I contemplate just how out-numbered I am, I would like to add that I’m awfully pleased that I can tick abseiling off my ‘must-do’ list having taken the jaw-dropping Soarin’ ride (although I did spent the first half of the flight wondering why on earth they had to drop the ‘g’). 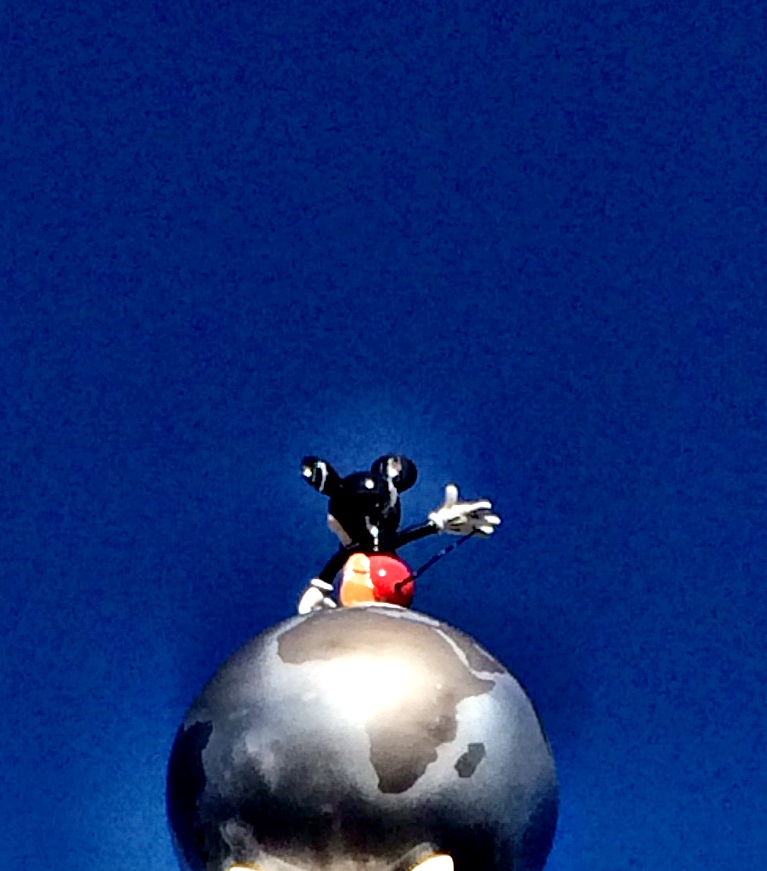 have I seen the back of that mouse?

Since we left the Parks for the bliss of an empty beach, I’ve also been trying to work out the perfect analogy for my Walt experience and I think it comes down to the Yank pastry staple, donuts.  First mouthful?  Unreal, delicious and you really wonder how they make them taste quite SO good.  Second mouthful? A little less mindblowing, but still heavenly.  You finish it (because – like me – you have no willpower to stop when it’s that good).  The donut leaves you feeling more than a little nauseous.   Uncomfortable and slightly conned perhaps (as THIS donut was an expensive treat) – as too much of something that sugar coated, squidgy and perfectly formed has surely been set a trap… 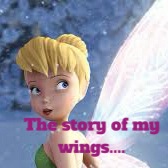