Film Review: Gravity… or a lack of.

Sandra Bullock in Stella McCartney at the premiere of Gravity

It could have been the mad rush to get all homework done before my mini cab arrived.  Or perhaps the terrible traffic as we stop-started the entire way to Leicester Square for this BFI London Film Festival premiere screening. And clearly not helped by the fact that sildenafil I hadn’t finished packing and was leaving for New York first thing in the morning.  Whatever the reason, watching Sandra Bullock and George Clooney flailing around in 3D space was making me feel utterly nauseous. 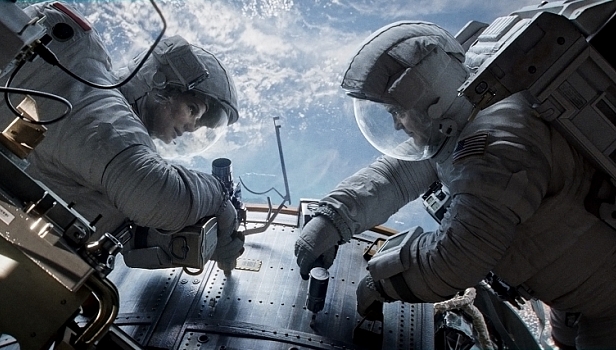 Sandra and George on set/in space

But because writer-director Alfonso Cuaron’s film is, in its most artistic form, a masterpiece, I forgive my queasiness and allow myself to be fully submerged into this eye-popping vision.  Either way being in space is clearly escapism (which both characters are seeking for personal reasons) and an entirely novel experience.

By way of setting the scene here, two American astronauts (Sandra Bullock as Dr. Ryan Stone and George Clooney Matt Kowalsky) are on a mission when some quite literal debris hits the fan.  Bullock pulls off a phenomenal lead, along with some pretty outstanding heavy breathing (as she loses oxygen),while the viewer quickly revises any previous dreams of travelling into space.

Ultimately (without spoiling) the film becomes more about self-belief and determination in the face of adversity than lack of oxygen.  While the plot is a little weak and the black, void silence a little wearing, there’s no denying that the originality will win this film a stream of 5 stars.  And, I suppose 90 minutes of head spin and a feeling of being dominated by the cosmos are a small price to pay for witnessing some quite astonishing filmmaking.

Gravity is released in the UK on November 8

2 Responses to Film Review: Gravity… or a lack of.