First Love and I lunch at Phil Howard’s The Square 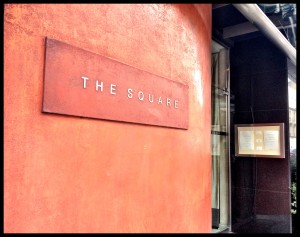 It’s been a while since First Love and I have hooked up.  He and his missus and their smalls live a proper train ride away and, unless we have a fiesta planned, weeks turn into months before a scheduled catch-up becomes an urgent matter.  It is worth mentioning at this point that any love he ever had for me is now channeled into his love of fine dining now.   Therefore making him perfect as my lunch guest at The Square last week. 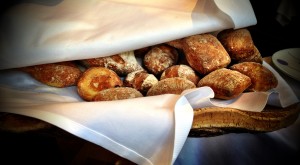 Working in an ad agency, he’s a well-practiced long luncher.  I, on the other hand, feel guilty stepping away from my desk.  Time and words are money (however little).  Damn life as freelancer (sometimes).  But I knew that this lunch was going to be worth every minute and even worth cheating on my current food mission.  Phil Howard is up there as one of the UK’s most respected chefs and The Square boasts two Michelin Stars while also surviving 21 years on the London restaurant circuit.  I say that because more often than not a restaurant peaks and then goes slowly downhill.  It’s still at the top of its game so I was pretty excited to dine there. 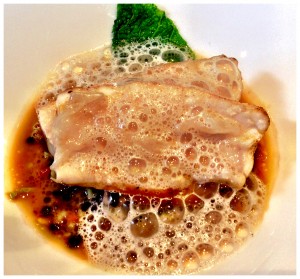 my monkfish at The Square 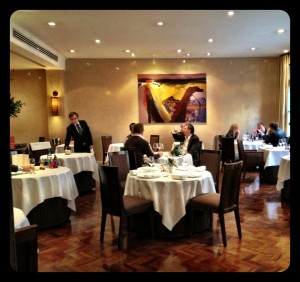 spaced out tables at The Square

Bearing in mind it was lunchtime and the restaurant is on the corner of Berkeley Square, I was not surprised to find our fellow diners were rich-looking business men enjoying a fine dining experience masquerading as ‘a spot of lunch’.  The tables are cleverly spaced so that big deals can be done in secret while the ratio of waiters to tables is simply boggling.  So, this is how the other half lunch, I thought.

First Love wasn’t concentrating on anything I was saying.  He was pouring over the extensive menu, in a food version of his heaven.  He instructed me not to choose anything he was ordering.  I obeyed, by ordering the infamous Dorset crab lasagna followed by the monkfish with savoy cabbage and lentils.  He chose the daily special, which was scallops, before delighting over his fillet of turbot with autumn truffle and walnut pesto.

‘I totally lost the wine thread’

But if you think that was all we ate, you are mistaken.  We were spoilt with everything from a sweet smelling fresh bread basket to exquisitely delicate amuse-bouches.  Our sommelier, making choices on our behalf, treated us to a Viognier de Rosine from the Rhone Valley and a Savigny-les-Beaune from Burgundy before I totally lost the wine thread.  As usual, I was the weakest link on the alchohol front but First Love more than made up for my pathetic sips. 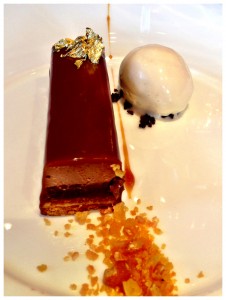 Dessert took the biscuit though.  Milk chocolate bar with salted peanuts, praline and banana sounds good but it tasted even better.  Now more of a drunk old man rather than my First Love, he choose the cheese trolley before rolling into Selfridges to begin some dangerous Christmas shopping.

Although we ate a la carte, The Square offers a really reasonable set lunch menu: £30.00 for two courses or £35.00 for three. 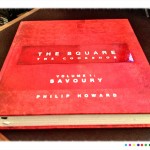 COMPETITION:  I promised I’d mention Phil’s six part digital mini-series, entitled ‘The Kitchen Foundation’.  Produced to run alongside his brilliant cookbook The Square: The Cookbook Volume 1: Savoury, the films are well worth dipping into. Have a look here.  And then enter my competition to win the cookbook (£40).  I have 2 copies to give away and all you have to do is sign up to my blog (top right of homepage),  follow me on Twitter and RT the picture of the cookbook on Wednesday 5th December. The lucky winners will be selected randomly on Thursday 6th Dec 2012.