Today I am posting a guest blog from one of my nearest and dearest.  Warning…  despite being a book review, these words are from the heart. x

There is much I can relate to in Rachael Chadwick’s 60 Postcards – that’s probably why Best Friend cautiously suggested that I review this book.   Eleven years ago I too lost my dear mum to cancer, all too young, with a loving family of three daughters, a brand new grandson and a wonderful husband all struggling to come to terms with the finality, injustice and quite simply overwhelming sadness of the loss.    Serendipity is a concept that threads through the book, so it was no surprise that I first settled down to read it on Mother’s Day. 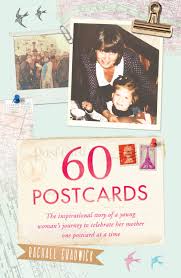 A little like becoming a mother for the first time, losing a parent unexpectedly gives you membership to a club that you never knew existed, or thought you’d be part of, but does give you a powerful solidarity on which to lean.  I was intrigued to see how this young woman had used her tragic and sudden loss to not only celebrate her mother’s life but help her to express her grief via a blog, and now via this book.  Consequently it has led her to her give up her job and take the 60 Postcard campaign further and wider meeting like-minded souls and unlikely pen-pals along the way.    One of the strongest themes in the book was the reviving role of family and friendship – both new and old.   I also recognised many of her well-observed reactions by friends and acquaintances on hearing the tragic news: the Suffer Police, the Disbelievers and the Tilters.

Whilst I can’t but applaud Rachael, I did struggle with her writing at times and as a result I am saddened not to be able to champion the book and its sentiment more.   I am not a fan of the asides or exclamation marks and in my opinion, the narrative could have been pacier.   Having said that, it was only when I reached the final chapter that I felt that the account revealed a more candid expression of her regrettable reality.   She speaks of the conversation she had with her Mum a few days before she passed away that allowed them to “acknowledge out loud, for the first and final time that we were going to lose each other forever.”   For me this honesty is what the mother/daughter relationship is all about – even if it breaks an unwritten family rule not to talk about the future.  I remember the same difficult and emotion-filled conversation I had with my mum more than eleven years ago and as I read Rachael’s final chapter, I too wanted to go tell everyone quite how fantastic my mother was, how much I miss her and still feel her guiding me every day.

60 Postcards: The Inspirational Story of a Young Woman’s Journey to Celebrate Her Mother, One Postcard at a Time is out now.