Every so often, I am asked by a reader if they can guest post on my blog.  More often than not, I reply enthusiastically.  And then I tend to hear nothing.  Perhaps it sounded like a good idea before they ate and drank too much?  Or maybe they simply needed to know if this soapbox is for sharing (which it absolutely is)?  Either way, on this particular occasion, my guest blogger didn’t fall silent.  (I actually don’t think he has EVER, in the history of time, fallen silent).  Here is his review and mighty fine it is too! 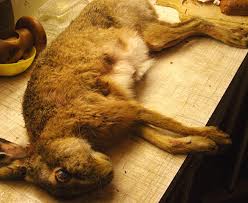 It is an odd experience waiting to be seated at the Jugged Hare. First impressions are of the impressive reworking of the architecture; this pub has stood on this corner of Chiswell Street (Chyselstrate) since 1750, just outside the walled City of London. 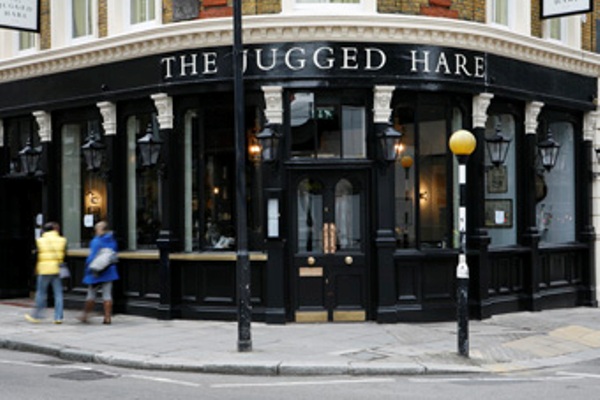 outside The Jugged Hare

But then you realise you are being watched, a fair few dozen pairs of cold eyes are staring at you. You look up instinctively.  A drove of stuffed hares stare down at you from the wall. They are mounted low enough to touch, to marvel at the ingenuity of the taxidermist. You feel at one with the greyhound. The hare, as it turns out, looks good enough to eat.

The menu is not for herbivores. Aside from a cursory nod to the vegan (who’s dish is entitled simply ‘Vegetarian’) it is a Barbour jacket and battered Land Rover of Hen Pheasant (from Yorkshire), Venison (Yorkshire again), Wild Boar, Blood Sausage, Pig’s Head/Trotters/Innards, Grouse (Yorkshire). (warning: religious Jews from Manchester will be offended). And above all, there is the Jugged Hare (no origin detailed, presumably because they are so fast moving, Vmax is at 45mph would you believe).

The food was rich.  Carlos Slim rich, not merely Mittal at the height of the steel boom. 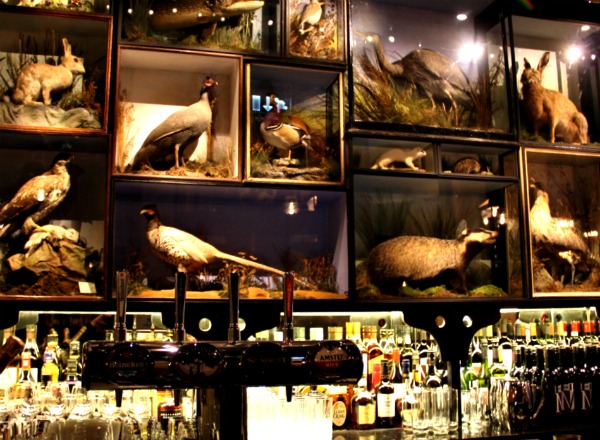 The Jugged Hare, essentially hare stew served in a jug, arrives with mashed potatoes (3 parts butter to 1 part spud) and good cabbage.  I had expected lead shot in the stew but found none (given their pace, how else do they harvest them?) instead an excellent, rich gravy – a dish that has to be tried. The waitress made a point of saying it was the best dish they served. Despite my cynicism, I just thought they had purchased a job lot (Catford Greyhound stadium recently closed) and needed to shift them, but – in any event –  she was right.

One of our party had the game pie (quite probably four and twenty blackbirds baked therein). It looked excellent, although broke the golden rule of having pastry around the sides and on the base, instead opting for a cylinder head of insulation, which merely keeps the contents hotter than lava but damages the experience somewhat. The whole baby chicken also looked superb for those of a surgical disposition, although the fine motor skills required in such an operation detracts from the dining experience. Certainly it does reduce the speed of consumption, never a good thing.

Wine list is weak – we had two whites, a Grenache (Cote de Roussillon 2009) which was too fruity and a Viognier from New Zealand which was too oaky. The selection is poor, maybe they are expecting you to go for the heavy reds for the full Medieval Banquet/Last days of the Roman Empire.  And go you should.