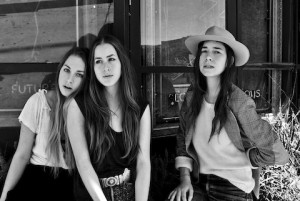 They say never to do business with friends nor family.  But here we have an exception to the rule.  I headed out last night with my girlfriend-who-knows-almost-too-much-about-music to hear a band she reckons will be huge.  At  Camden Lock’s, Dingwalls, we saw Haim, a recently signed band of three massively talented sisters.  Combining folk and rock with R&B in a way I don’t suppose many families could, I was pretty impressed. Fresh from LA (and school I’m assuming), Danielle (vocals, lead guitar), Alana (vocals, rhythm guitar, keyboards, percussion) and Este (vocals, bass) are the sisters with Dash Hutton as their mister on the drums.

The sibling band started with their parents’ shared love of music.  Dad was a drummer and Mum was on the vocals and guitar.  You can imagine that the girls were raised on classic rock.  But adding the influence of 90s R&B is simply genius. With cold beer in hand, we were blown away.  And then their parents joined them on stage.  It could have been a cringe moment but these girls are just too cool.

Last night I was a guest of Record of the Day, the music industry’s favourite daily digest.