I baked a little challah 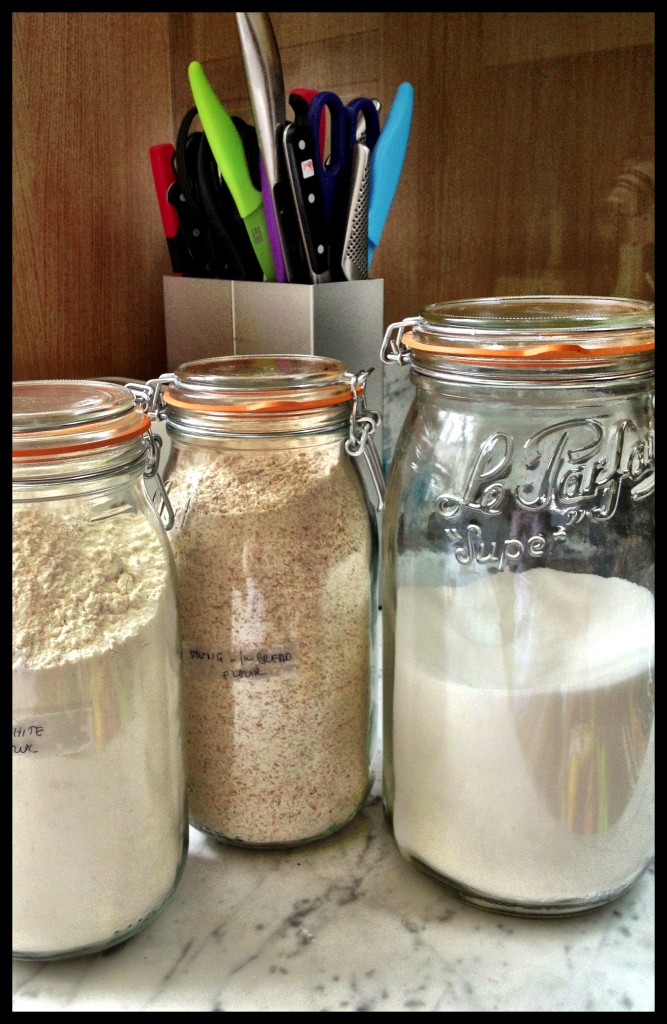 If you were to ask me what is the single best thing about being Jewish, I’d have to admit it comes down to my LOVE of challah.  Challah is a loaf of yeast-risen egg bread that is traditionally eaten by Jews on Friday nights (and all day Saturday if you’re not careful), as well as on ceremonial occasions and festivals. 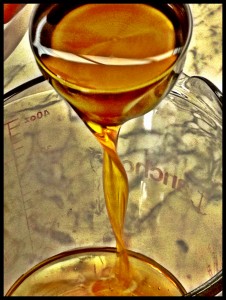 measuring out the oil

In a nutshell, it’s sweet and doughy and eggy and is best eaten with lashing of Lurpak.

The best (squidgy) challahs are sold in a bakery called Daniel’s in Temple Fortune (somewhere North of here) where my kind sister-in-law buys a family batch every Friday morning and delivers ours to us at some point during the day.  (In fact, it’s usually hanging on our basement door when I get home from Mini’s piano lesson.)

More than a little intrigued by my (jewish) loaf eating skills, I jumped at the chance to make my own.  Handily, interior designing friend is practically a professional chef in her spare time and, seeing as the Jewish Sabbath is a regular feature of her week, she has added challah baking to her Friday ‘work load’.  So I popped over to her stunning new kitchen, we switched the wii on and then instructed the 5 smalls not to even come close while we baked. 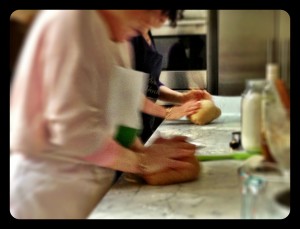 a need to knead our challah for ten minutes

As with all great traditions, there’s always someone who can show you the ropes and her friend Jane Tobin Green (who apparently makes the most amazing challahs) gave her a kick-off lesson.  Friend explained that, using Jane’s recipe as her base, she has gone on to experiment with the quantities of sugar and honey, substituting spelt flour and/or raisons as she fancies.

the proof will be in the challah

I glanced around for a bread machine but was quickly reprimanded. Kneading by hand is the only way, I was informed.

We used part whole wheat flour that morning (for an additional nutty flavour) but since then her family has pushed back; they are insisting that their challah shouldn’t be so healthy and are keen that the loaves are whiter and eggier than ever.

Anyway, here is the recipe we followed – it makes 2 loaves.  Friend says that it’s a hybrid between her challah-making friends’ versions and the US foodie community site, Food52.com: 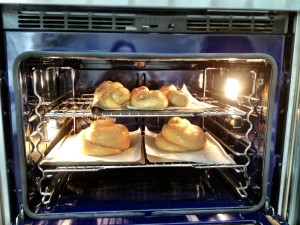 the smell of the baking challahs were divine!

If using fresh yeast, dissolve the 2 tsp sugar into the warm (quite hot but not too hot so that it kills the yeast) water and add the fresh yeast.  Cover with cling film and let it sit for 10 minutes until the yeast dissolves and begins to foam.

While it is resting, combine all the dry ingredients into a large mixing bowl (the largest you have).  If using dry yeast, sprinkle over the top of the flour mixture. 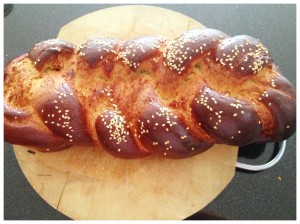 In a separate bowl whisk together eggs, oil and honey.

Add all other wet ingredients and mix until it comes together and seems “doughy”.

Turn out onto floured surface and knead for 10 minutes.

Place in large oiled bowl, cover tightly with cling film, and leave in a warm place to prove for an hour or until doubled in size.  NB I sometimes do this whole first stage the night before and put the dough in the fridge for the first prove.  If you do this, make sure that you take the mixture out of the fridge an hour before you want to shape the challahs so that the dough is at room temperature.  Then just continue the process as below.

When ready, divide dough into 2 and make your loaves (braided or round).

Place the challahs on baking sheets lined with parchment and lightly cover for a further 40-60 minutes for the second prove or until they have doubled in size.

Bake for 10 minutes and then turn the oven down to 180 degrees without opening the door.  Continue to cook challahs for a further 30-40 minutes until they sound hollow when tapped on the underside.  This gives a dark crust but if you prefer a lighter crust, simply bake at 180 for 40-50 minutes.

check out my little challah-plaiting film!

If you would like Friend’s whiter and eggier challah recipe, drop me a message and I’ll get her to whizz it over.