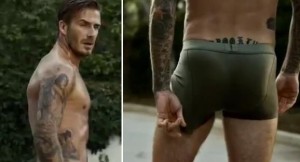 I’m having a few issues getting any work done today.  And I totally blame Beckham.   There is a stack of blog posts to be written  and, well… the new H&M short film shot by Guy Richie is on FULL ON repeat here at Life of Yablon HQ.

Men’s pants are not usually my thing.  But doesn’t he run well in these army-green ones (part of his collection at H&M launching today)?  Who would have thought rearranging a wedgie could be so utterly seamless and sexy?  And damn that bush which robs him of his vest top!

OK, if you’re frowning either at my explicit lust or just because you haven’t seen the film yet…. View it now before you read further.  (I’d hate to feel responsible for spoiling the end).

Other than the obvious, particular highlights for me are seeing him run in bedroom slippers (never easy), the slightly naff ‘Bend It Like Beckham’ moment and the power crawl across the ridiculously dressed neighbour’s pool.

So, I predict internet frenzie.  And that I’ll watch the film just ONE more time…

Despite not being a tweeter, David Beckham has taken over @HM Twitter feed today and will host a Q&A session for fans at midday.