rum’s the word at Rum Kitchen 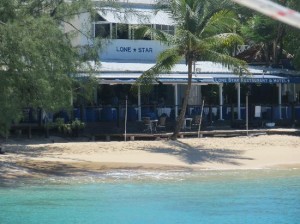 Back in October 2001 (only weeks after September 11th 2001), fear was at fever pitch and flights were cheap.  But He and I weren’t put off.  Having just got married a year earlier, quite frankly, the tantalisingly cheap, long haul fights were appealing.  So off we set for Barbados with another fearless couple of friends in tow.

While we were there, we ate regularly at a Caribbean beach shack called Lone Star.  With its eclectic menu and relaxed atmosphere, it was a perfect place to hang out after a long morning doing a whole lot of nothin’. 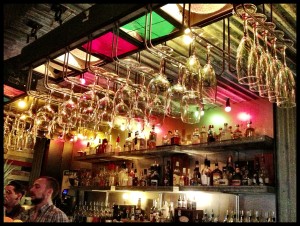 the bar at The Rum Kitchen, All Saints Rd

And this is what I half expected from the most recent addition to All Saints Road, The Rum Kitchen.  Anyway, it needed to be chilled.  The Red Head has had more stress (in the love department) than she needed and, despite being horizontal now, I needed to keep her that way.  Rum would do the job. 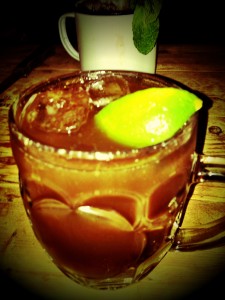 Ironically, The Rum Kitchen is yet another success story from the team behind Ping, which I incidentally had reviewed with the Red Head and her (at-the-time) Him.  Either way, a local night out with a few reggae tunes, some jerk chicken and a good old catch up was in order.

We had a Rattle Skull Punch and a Grog 349 (both £8) while we perused the brief menu.  I mean, how many choices of jerk does one need? (cue more irony).

Our mains, Curry Mutton (8.50) and Spiced Up Chicken Supreme (£14.50) satisfied our hunger.  But, was it soul food?  Well, it’s not the most attractive food I’ve seen on a plate but clean the plates we did. 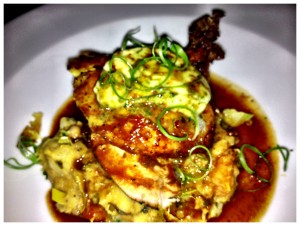 spiced up chicken supreme at The Rum Kitchen

The Run Kitchen’s West Indian interior impressed us much – and I’m NOT usually one for themes.  But the shack’s oil-drum tops and beach benches worked a treat. Downstairs we checked out the rum cellar where we found no lack of the sugarcane beverage.  Things hot up down here post 1030pm (when the whole place becomes a private member’s club) and, from what I hear, DJ Fast from The Fun Lovin’ Criminals spins the vinyl. 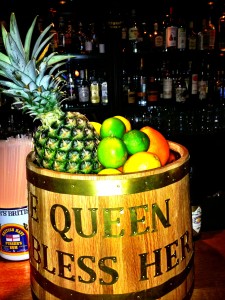 In the heart of London’s Caribbean community, I spy a winner.  It’s fun, casual and is only lacking a beautiful Barbadian beach at the front.

oh and The Red Head has just taken her jewels online.  Go check out!