my imaginary researcher tipped me off: Newman Street Tavern. 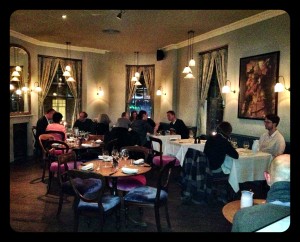 I’ve just declared today a DAY OFF for the entire team here at Life of Yablon HQ.  Yes, I’ve sent them all home.  The accounts team politics were driving us all mad (don’t they have enough to do?), the team of writers is simply exhausted (too much partying this weekend?), the blog’s in-house photographer is having social life issues and my PA is coming down with severe flu.  So here I am On. My. Tod.  Again. 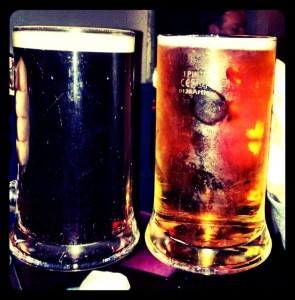 But, you may well ask:  what about my researcher?  Who advises me where to eat-review next?  Which film will my readers be dying to know more about?  And where (for gawds sake) should we be shopping?

Naively, I hadn’t really realised that the Corens and Gills of this world have researchers.  That was, until I recently read that Giles’ personal source had suggested Newman Street Tavern alongside some other equally juicy recently-opened eating establishments.  I decided it was absolutely fine for me to ‘share’ this tip and promptly found myself a table.

Newman Street, located in the area just north of Soho, is Freud-land to me.   Some call this area Noho, other refer to it as Fitrovia – either way, with the advertising buzz of Charlotte Street spitting distance away, this is, without doubt,  Media Land in general.  But I don’t know if Newman Street Tavern is where those real media types eat their lunch as I chose to visit on a Saturday night. 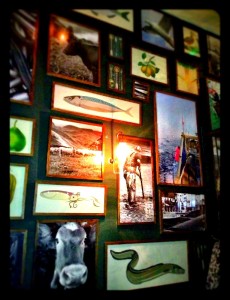 wall pics of those previously slaughtered

Not quite as lazy as all that, I did do some of my own research into this tavern (don’t for goodness sake call it a gastro pub.  God forbid.)  And it was their obsession with our national seasonal produce that really appealed to me.  A mere three months ago, the tavern opened (it was a horrid Ping Pong before) and has been serving some seriously fresh as well as equally delicious meat, fish and veg since. 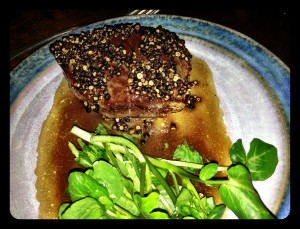 We sat upstairs, drank some joyous beer (on tap from Crate Brewery in Hackney Wick) and enjoyed (between us) roast lamb, crab on toast, fish and chips, peppered venison, onion tarts and a little devilled rabbit offal.

Nothing was less than utterly scrumptious. 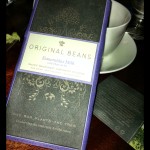 Too full for desert, we thought Newman Street Tavern’s idea of a bar of Original Beans chocolate (a conservation chocolate company, planting a tree for each bar bought) was truly original.  Pots of Henrietta Lovell peppermint tea with a bar of salted caramel chocolate were a perfect end to our meal. 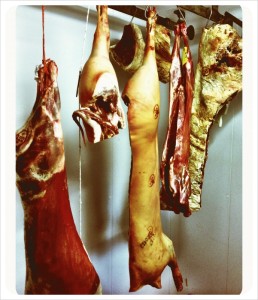 those hanging in the Tavern’s fridge

Before leaving, we were invited to visit the kitchen to see some of these true British beauties before they were prepared for consumption.

And, as we left, I noticed that lunch is served til 5pm each day.  A true sign that the tavern is ready and waiting for those medija luvies… and THEIR researchers.