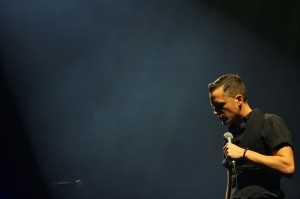 My music friend was my fairy godmother last night.  ‘You shall go to The Killers’ she confirmed.  She knew how desperate I was to see Brandon Flowers perform live, but not desperate enough to pay the ridiculous Viagogo prices.  Anyway, as she’s perpetually full of music magic, she made it all happen with a flick of her wand. 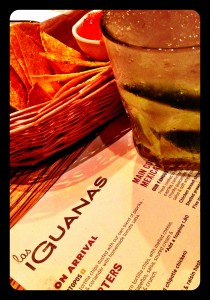 We met for a couple of cocktails and a cheeky Mexician before the concert at Las Iguanas.  The chain’s lovely PR has been keen for me to experience their Latin American vibe and… well, I thought this would be a perfect moment.  Their O2 branch is literally located in the ‘Millenium tent’.  We chomped our way through one of their famous chicken breast fajitas and two salads, one full of superfoods such as beetroot and pomegranate and the other decorated with crayfish and sweet chilli.  Rather than being bowled over by the food (it was fine, nothing remarkable), we were fascinated by the unusually brilliant team of staff working in the packed restaurant.  Yes, unfortunately, it is unusual to be greeted and served by a bunch who are pleasingly cool.  Communicative, cheerful (without being OTT), efficient and cool (without being uber cool).  And none of these compliments have anything to do with the caipirinhas (£6.40) they kept bringing to our table…. 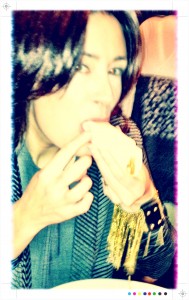 Music friend tends to be a little scathing of my music choices.  I don’t take offence.  She lives in a real music world whereas I just happen upon bands I like.  Anyhow, it turns out, she wasn’t just humoring me tonight. She saw Brandon Flowers at the HMV Forum a couple of years ago where the Camerons, Tim Burton and Helena Bonham Carter had also been in the audience.  Flowers seems to attract all sorts.

Suddenly realizing the time, we scooted off to our seats… only to find we were sitting next to Tim and Helena… clearly die hard fans of Flowers.  Well, that’s what we thought until he dedicated Bones to ‘our friend Tim’ and then we put 2 and 2 together and worked out that Tim had directed the music video for this track. 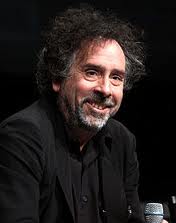 Brandon is tiny, a micro action man dressed all in black.  His voice and energy were equally blinding.  The atmosphere was electric and so inspired some pretty alternative dancing from the acting queen and her genius director husband.

The set list was sprinkled with tracks from their new album Battle Born such as Runaways and The Way It Was but it was really Miss Atomic Bomb, their new single, which set the stadium crazy – along with big hits such Mr Brightside and Are We Human?

Sorry Manchester fans (Flowers had to cancel a couple of dates up north due to sickness) – the concert was every bit as amazing as I had hoped it might be.

One Response to O2 The Killers live review: Brandon Flowers and the Tim Burton connection