Oh dearie me.  I bear bad theatre news.  The woman who brought us the best ad ever (I have been counting ologies ever since), Maureen Lipman, is currently performing in a most disappointing middle class drama at Hampstead Theatre, NW3. 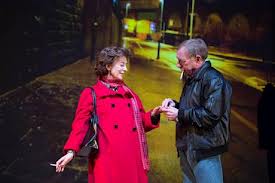 Now I love to support local businesses, particularly cultural ones.  But more than this, Hampstead Theatre is a registered charity and one which I know regularly appeals for financial support. So, I had decided to take the Red Head along as part of her belated birthday present.  She and I have always been fans of Maureen.

Written by Sarah Wooley, the script is where the real disappointment lies.  So lineal and one-dimensional is the story of these three generations of women that I found my thoughts wandering to a conversation I had had earlier that day, to Mini’s carol concert and to anything other than the play I was watching as I wondered when anything would actually HAPPEN.

Lipman is, of course, sheer joy to watch though.  She gives a wonderfully inspiring performance as Joyce, the recently widowed grandmother looking for some fun in her life after 46 years of dull marriage.  Keen to avoid grandchildren childcare duties and endless cash handouts in the direction of her whining, depressingly-hopeless up-the-duff 42 year old daughter (Tracy-Ann Oberman), she makes some necessary, (perhaps) selfish life plans. 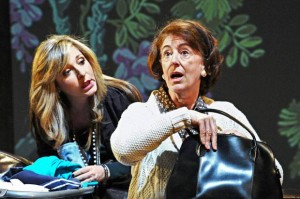 Without any real twist nor unpredictability in this plot, the play bumbles along held together simply by Lipman and her striking red coat and strip joint visit rationale, which are amusing.  The delivery of her lines is immaculate, making her character utterly convincing despite surrounding soulless performances. 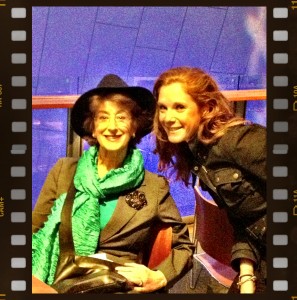 Red Head with Maureen Lipman after her performance in Old Money

Red Head and I were in no hurry to leave the theatre as we began to discuss the play.  Maureen Lipman was leaving at the same time as us.  She seemed disappointed to see that the Hampstead Theatre bar was shut (another commercial faux pas?) but did kindly pose for a quick photo before she left.