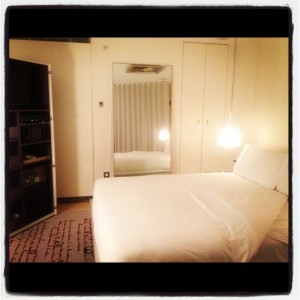 Bedroom at the Sanderson

There isn’t just one single thing which makes staying in a fabulous hotel so thrilling.  Perhaps it’s the combination of crisp, fresh linen, bathroom fun-size potions, a fluffy white toweling robe and the magic telephone which could bring me anything from a hot dinner to an extra pillow to satisfy my any whim.  However, watching TV in bed is pretty high on my thrill list.  I’ve never had a TV in my/our bedroom as I’m pretty sure it would kill my bedtime reading, attract the Smalls on weekend mornings and… everything else in between.  So when it was suggested to me that I might like to review the Future Shorts Festival Summer Programme where the short films are exclusively available on demand at the Sanderson hotel, I speed-dialed a girlfriend and hot footed to the 5 star designer urban hotel just north of Soho, W1.

Those readers who knew me when I was a full-time Yablon might remember that I was, at one point, responsible for building awareness in London of the Morgan Hotel Group – in advance of St Martin’s Lane and the Sanderson hotels first opening in late 1999.  The group’s hotels, on both sides of the pond, have always been instant hits as their ‘boutique’ hotel concept combined with daredevil design and personalised service allows them to stand out in an indistinctive 5 star hotel market.

We were shown to our hotel room and given a generous room service tab so that we could order our in-room dining while we viewed the shorts.  Treating ourselves to a tipple from the mini-bar, we kicked off our shoes and reclined on the bed to watch Grant Orchard’s “A Morning Stroll” (7 mins / UK, 2012).  The story of an encounter between a New Yorker and a chicken is told over three acts spanning over 100 years.   This highly unusual yet not overly optimistic animation has already won a BAFTA and a Jury Award at Sundance and was nominated for a Short Animated Film Oscar. 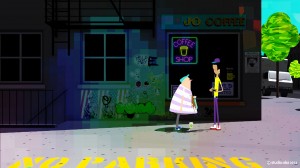 Next we selected Guest (2011) the South Korean film which won the 2012 International Grand Prix at Clermont–Ferrand.  It’s an uncomfortable twenty minutes of a teenager’s fury.  She is furious with her father regarding the affair he has been having and we witness her barging into his home to find two small children (the mistress’) where she unleashes a barage of emotions.

A knock at the door and our dinner was served.  We had chosen a number of dishes from the Malaysian Suka menu.  Scallop satay (£12), Ikan Bakar (sea bass baked in banana leaf £9), Kaksa Johor (fresh crab and noodles in coconut soup £10) and Sotong Goreng (grilled squid with ginger, coriander and green pepper £10). 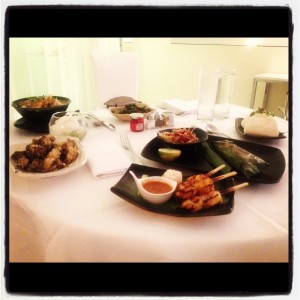 Street Vendor Cinema (2011 / 15 mins) was the last short film we watched. Written by Brazilian Clarissa Knoll, the film tells the story of a short film producer  who sells filmmaking on demand in the busiest shopping street of Brazil. The outcome is an extraordinary mix of genres, from a samurai epic to a family melodrama, amid the market’s chaos.  Girlfriend-on-speed-dial and I probably found this one to be the most interesting short film of all of them.

Dragging ourselves off the big white bed, we reluctantly headed downstairs to check out the hotel’s Monday evening night life.  There were a few corporate diners in the stunningly calm courtyard garden with its fountains, pools and giant bonsai tree and, before finally leaving, we browsed the brilliantly quirky hotel shop.  As I headed home, I thought I could get used to reviewing all films in luxurious hotel rooms….

To enquire about room reservations at the Sanderson Hotel, call  020 7300 1400  www.sandersonlondon.com