There’s a running joke in our family.  If the Ocado man doesn’t deliver, we will starve to death.  Except that it’s not a joke AT ALL.  I’ve tried to be a mooch-around-the-supermarket type of girl and… well, it just isn’t happening.  The bottom line is that there is too much else I’d rather be doing.

So, understandably, I’ve been a little nervous of my men (in Ocado uniform) leaving me in the lurch.  Certain items are running low (or out) and chit-chat around the top of the range Aga is that times are tough for the food delivery team.  Sister-in-law is fed up of finding no clickable nappies when she logs on and even suggested we moved across to another online grocer.  ‘God forbid’ was all I could utter as I enjoyed her malteser cake (ingredients delivered by you know who). 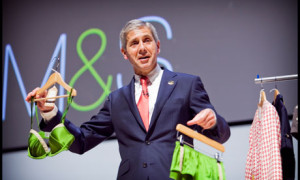 In steps our knight in shining armour:  Sir Stuart Rose.

He of ex-bras and knickers retaildom (he left M&S in late 2010 after a 6 year stint) will now be responsible for my groceries.  And, aged 63, he is indeed no spring chicken.   But any retail analyst (of which I am not despite my shopping habits) would agree that his experience is rich and his strategy will be strong.

And let’s hope so.  Otherwise you’ll find a bunch of skeletons at this end.

For the more sensible business story, read this.