Honestly, this post has been a long time coming.  But the week that saw a ‘celebrity instagrammer’ banned (albeit temporarily) from the social media network has been enough to spark me off good and proper.

Because, out came the opinions… the heavy-handed critism about bloggers’ photographic documentary of their offspring on social media platforms in general. Rants, accusations, scare-mongering…

I’ve listened to many of them.  But I just don’t agree.  Courtney Adamo’s photograph of her toddler wasn’t offensive, which is why Instagram (finally) apologised and reinstated her account.  Her toddler was showing her knickers, a moment of pride for anyone being potty trained and the photo wasn’t in the least bit offensive. 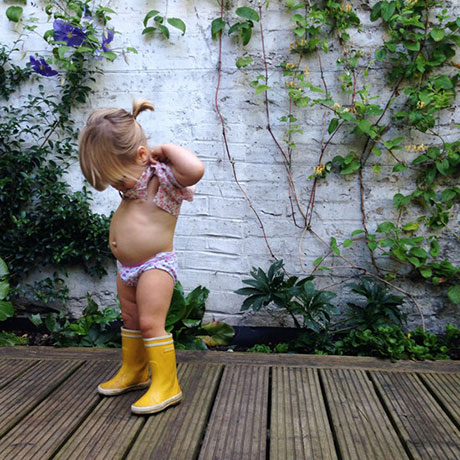 On various social networking sites you’ll find images of my team.  I’m conscious (and promise Him) not to overdo the exposure while regularly asking myself how the Smalls will feel about the photographs (and some of my words) in years to come.  I hope that the stream of happy moments serve as precious memories, a modern day version of all those albums gathering dust, and that they will also remember just how much I loved to point and shoot.

But is (as some indicate) displaying photos of your family really showing off?  Listing your child’s achievements or blowing his/trumpet as a status update might very well be but when it comes to images, don’t we need to accept that social media is now seen as a valid community in its own right?  Or perhaps even the new-age equivalent of those leather-bound family albums?

I suppose the bottom line is that while the dangers of the internet are very real, each parent must decide their own boundaries while precautions are taken by most.   Because of Courtney’s enormous following and influence, she was able to make us all think about what is truly appropriate to share online.  Meanwhile I must just ask this:  if her toddler had showed her knickers in M&S, would everyone have screamed and run in the opposite direction?

This article first appeared in The Lady where I am their Mum About Town.