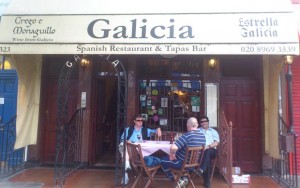 I’m not one of those people who sits around wondering where we should eat out. In fact, to let you into a secret, there is a pile of mouth-watering magazine clippings by my bed and I regularly note in my Blackberry any passing culinary recommendation. So, when a restaurant features on both short lists, I know it is time to investigate further. Galicia, highly recommended by David Cameron, Sophie Ellis-Bextor and many Ladbroke Grove locals, looks most unassuming from its small, strange shop front. And when I finally managed to get hold of the owner, Senor Edward, he and I had a confusing half Spanish half English conversation where I’m pretty sure he invited me down to review, but I couldn’t be absolutely sure.

No-one could describe Galicia as glamorous. We’re talking pink tablecloths, flower-power plates and a deep-fried smell. But the food is as authentic as the region it is named after. I had chosen to dine there with a long lost girlfriend. Some girlfriends we don’t mind losing along the way and then there are those we put up a fight for. This one has been in the far-off land of nappy-valley but has now hired a roster of reliable babysitters so that she can leave the baby wipes at home.

As tapas are a true celebration of Spanish culture, I thought this would make a perfect sharing fodder for the occasion. We asked our charmingly moustached, old school Spanish waiter to make a selection for us and, within minutes we were faced with a table laden with tortilla (£6.75), chorizo (£4), patatas bravas (£3.95), grilled sardines (£4.75) and calamares (£5.95. Rioja in hand, and with the odd cooing at recent baby snaps, we appreciated the unpretentious and warm Celtic spirit of this local eatery. Pleading no room for desert, we were ignored by Edward and his team. Indulgent tiramisu (£3.50) and profiteroles (£3.50) were proudly presented. And, even then, the waiters hovered over our table to see if we were enjoying the indulgence.

I would imagine that if my grandmother had been Spanish, this is the fare she would have cooked and also the manner in which she would have greeted and served her guests. What I am trying to say is; don’t drop in looking for healthy, delicate or elaborate cuisine. This is down-to-earth, home-cooked people’s food. And do call Edward to make a reservation. From what I hear (and read), it’s often fully booked.