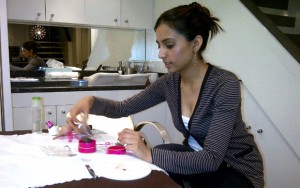 Semi-permanent eyelash extensions are as big today as perms were in the ’80s. And they are pretty similar too, in that they don’t last for longer than a few weeks and tend to have a displeasing regrowth period, making them a bit of a double-edged sword. Having had them as a treat for my big 40th birthday party, I was keen to try again, if only for the initial couple of weeks of just-out-of-bed glamour.

Thirty-year-old Asma Docrat set up Boudoir Lashes to quite literally open our eyes to the world of lash and brow beauty last year and has since provided London Fashion Week, Elle’s editorial team and Mario Testino’s photo shoots with copious lash extensions and tidier brows. I found her self-assured, but not arrogant and innocently honest without being impolite.

Noticing that my lashes are naturally pretty long, Asma asked me how I wanted to look as she can tailor the false ones to suit your eyes, face shape and personal preference. With an important business dinner at the House of Lords that night, I was keen to avoid a footballer’s wife look and to walk away with less than obvious extensions. So Asma set about mixing three different extension lengths to create a natural yet lustrous full-lashed flutter.

Each of the synthetic lashes was glued onto my existing lashes in a rather painstaking hour-long process. But as Asma’s fingers are nimble and precise and she, thankfully, makes good company, the treatment time passed quickly without feeling too tedious.

The effect is definitely subtle, but also pretty glamorous. Friends notice that something is different but can’t quite put their finger on it. I haven’t reached for the mascara for at least three weeks and even felt like a diva putting the bins out in my pyjamas. The only negatives have been fitting my longer lashes into swimming goggles and, of course, that my new flutter friends won’t last forever.

One Response to lashing out…