The long journey getting Kerouac On The Road 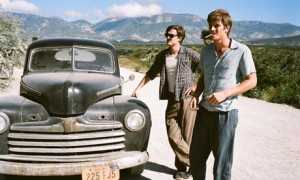 Riley & Hedlund in Kerouac’s On the Road

Having read the book as a teenager, I needed no persuasion to see Jack Kerouac’s long awaited novel-conversion to the big screen.  I recall finding the book, On The Road, and its characters slightly shocking (their freedom was a stark contrast to my boarding school surroundings!) and I remember our slightly risqué English teacher lingering over the sordid backdrop of the Beat Generation.

But what surprises me today is the media’s endless list of queries surrounding On the Road as it takes to our screens this week.

Why has it taken 50 years to make this film?

What happened to Kerouac after his successful cult, post-war American masterpiece?

Did fame and notoriety destroy him?

Is there any other generation-defining literature that we have ‘forgotten’ to cinematize? 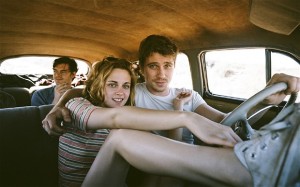 In his work, Walter Salles (director) has probably answered most of these questions.  The film is long, rambling, aimless – just as it should be.  Because, on paper, Kerouac tells his semi-autobiographical tale of post war society in the 1950s in a reasonably long-winded way. And the film perfectly mirrors this.

We journey across America with the budding writer Sal Paradise (Sam Riley) who has recently lost his father.  Hanging out with Carlo Marx (Tom Sturridge) and Dean Moriarty (Garrett Hedlund), they party like it’s 1949.  Wild and selfish Dean initially draws academic Sal into the liberated world of sex, drugs and jazz but, as they get further down the road, Sal is only too aware of Dean’s failures in life.

The females (Kristen Stewart, Kirsten Dunst, Amy Adams, Elisabeth Moss) in the film are stronger characters than I remember them to be in the novel. Again, generation-defining and era-mirroring, they complete the picture of excess, irresponsibility and lack of direction.

All in all, this is a handsome piece of cinematic work.  The journey is an enjoyably indulgent one where we can spot elements of our over-partied days as well as the dangers of escapism.  However, as with the book, we are left wondering what was the tale was all about?  A road to nowhere?

On the Road is currently showing across the UK. 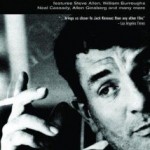 COMPETITION:  So what did happen to Kerouac? If, after watching the film, you are still left wanting to know more about this iconic American novelist and poet, then I may just have the perfect competition prize for you.  I have 5 x What Happened to Kerouac?  (worth £19.99 each) DVDs to give away.   Full of unseen interviews and footage, this revealing portrait of the King of the Beat Generation shows us what happened when fame and notoriety were thrust upon an essentially reticent man. All you have to do is sign up to my blog (top right of homepage),  follow me on Twitter and RT my On the Road quote on Friday 26th October.  The lucky winners will be selected randomly on Saturday 27th October 2012.

One Response to The long journey getting Kerouac On The Road