the real cowgirl at Cowshed 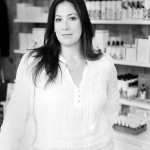 The problem with first meeting Christina Russillo, Director of the spa inspired beauty brand Cowshed, was that I didn’t manage to meet her properly.  We were sat at opposite ends of a rather posh (ie non-shouty) dinner at the House of Lords.  He, on the other hand, did chat to her and left saying she was just ‘my type of girl’.  I immediately  fired off an email to find out if she lived in West London.  It’s not that I won’t travel, I should explain, it’s that I am always scouting for West Londoners to fill the My West London Life column I write for West London Living.

Christina lives in Westbourne Grove.  Perfect.  She wanted to meet for breakfast at Pizza East (310 Portobello Rd).  Even better.  And if we hit it off as He implied we would, the interview would double up as a blog post too. 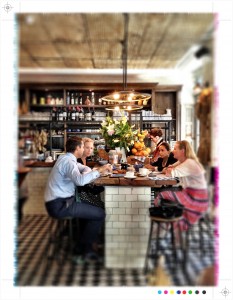 So, clearly we did.

Firstly Christina is a New Yorker – and there is a strong synergy between the Big Apple and this rather cool part of West London.  She’s also massively inspiring as a business woman.  In 2008, she left the firing-all-cylinders Bliss machine and took over what was simply an accessibly aspirational side-brand within the Soho House Group.  And, with a relatively small team of multitasking women, she has really put Cowshed on the international spa and beauty products map.

I buy Cowshed products as presents, treats for myself and I’m dying to visit the original spa at Babington House (I hope He is reading this).  But, in terms of brand recognition, the really clever Nick Jones ensures that no trip to the loo at any of the Soho House Group restaurants will fail to bring a smile to my face.

Here’s an exert from my interview with Christina which will appear on West London Living on 26th September:

How long have you lived in West London?

Nick Jones (founder  and CEO of Soho House) brought me over to London from NYC to head up Cowshed four years ago.  I spent the first 8 months in Chiswick but soon moved to the cooler vibe of Westbourne Grove. 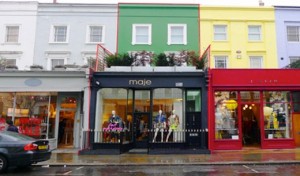 Westbourne Grove has a NYC feel to it

What do you love most about the area?

This part of West London reminds me a lot of living in New York.  It’s such a great melting pot of nationalities that it brings out a feeling of urban cool.  I find it really inspiring.

How do you chill out after work?

I love to spend quality time with friends, either eating out at Pizza East or Shoreditch House or in their homes.  I do force myself to work out too!  Living opposite Body Works West is pretty convenient.

And where might be find you on a sunny Sunday?

I love to hang out with friends down in Chiswick.  We walk my best friend’s dog and end up at The Roebuck Pub for a big roast lunch.

Where do you shop?

I am a massive Matches fan and, as a shoe freak, I love to check out their latest Christian Louboutin collecton!  MyWardrobe is a dangerous habit too – I recently found these fabulous geometric hoops.

Jane Shepherdson, CEO of Whistles, commented this week that she prefers to employ women.  Do you agree?

It is mostly females anyway who tend to apply for roles at Cowshed.  But this does work well because I need to know that the team feel passionately about the brand.  We recently ran a collaboration with Whistles actually (called Whistling Cow) – I am in full admiration for what Jane has done for Whistles.  I am a big fan of their Tshirts and recently bought this jacket.

Tell us a secret or 2 about Cowshed.

Well, we have some exciting launches and collaborations on the horizon.  If I just say Hush and Primrose Hill and you’ll hear more very soon!

One Response to the real cowgirl at Cowshed