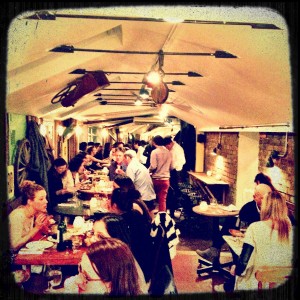 Do you ever play the desert island game?  I do, regularly.  It goes like this:  would I take this book/film/food/person with me to a desert island?  I find it’s the ultimate test.

While I was driving to The Shed in Notting Hill last night, I played the game.  Except that I was cheating a bit as I already knew the answer.  My guest, last night, is a dead cert desert island candidate for me.  (She will be mortified to read this but I won’t humiliate her further by mentioning her name.)  We met more than 15 years ago when we worked together for a gadget shop.  She was the buyer (what a job!) and I was the PR.  Anyhow, I could chat, giggle and discuss the world in minute detail with her till the cows come home.

Talking of cows (and other farm animals), The Shed, last night, was to be reviewed.  All the big names writing for real media have jotted down their thoughts in the last couple of weeks* and, well, the buzz is as noisy as a farmyard in West Sussex.  And that’s exactly where Gregory one of the (three) Gladwin brothers is based as he is responsible for hand-rearing the livestock. 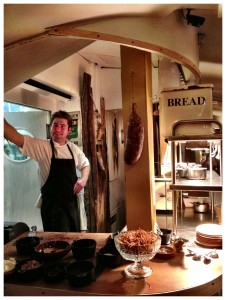 Oliver the brother who chefs

a little rabbit loin to share at The Shed

Oliver is the youngest brother (he’s only 26) and he is the chef.  Ex-Just St James and trained by Hugh Fearnley-Whittingstall at River Cottage HQ, you can imagine he is lacking neither confidence nor ability.  And last, but certainly not least, is Richard the restaurateur.  He’s charming.  Not in a cringy, overly–friendly sort of way but more in a ‘take home to Mum’ new boyfriend sort of way.  Quickly reminding myself that I’m married as well as 12 years his elder, Jessica, our waitress (also social media and marketing bod) introduced herself to us.  She is Richard’s girlfriend.  Another reason for us, hungry ladies, to get on and order. 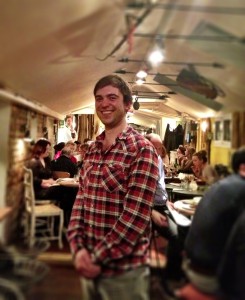 We chose a ‘mouthful’ each (£1.50 canapé-sized) to accompany our drinks – a virgin mary for me and a glass of Nutty Brut (£9) for her – and then, as recommended by Jesssica,  we ordered 5 sharing plates… to share.  Well, actually, we ordered 6 or 7 in the end because we just couldn’t decide which ones to strike off our list.  But 5 would have been more than ample.

Unlike AA Gill, we thought the lamb chips were outstanding! and this is the chorizo, labneh cheese with crisp bread.

And then we shared the pear, almond cake with custard (£6). 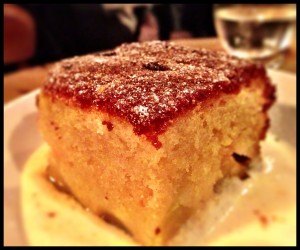 Every. Single. Dish. Was. Divine.  I have no idea how to write this review any other way.  We agreed that the food is basically a British Ottolenghi and the style of The Shed is very Mumford & Sons.  You’d imagine Marcus, Ben and Ted would feel very at home there .  Anyway these Gladwin brothers are talented, hard-working posh boys and they certainly know how to feed a Shed-ful.  It was packed on a Tuesday night so, if you can’t get in for dinner, book for lunch, weekend brunch or, if you’re the right side of 30, simply find out if Oliver has a girlfriend?

*Giles Coren was there reviewing last night.  And he came over and said hi.  But I thought I’d not make a big issue of it in this review.  No biggie.