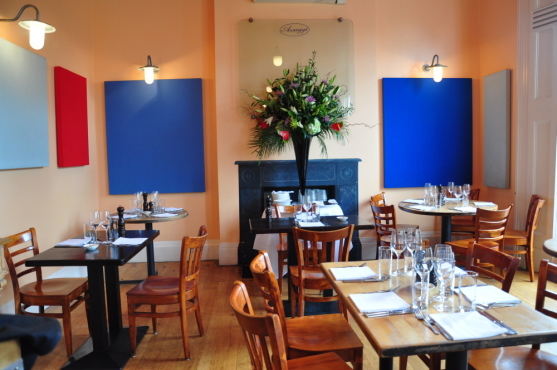 My Blonde was always going to be snapped up.  Not only is she gorgeous, she’s too much fun to sit at home knitting a scarf or watching reruns of any American sitcom.  And so finally, the not-so-new-man in my Blonde’s life was wheeled out for dinner with Him and me last night.  Not-so-new-man had suggested Assaggi for dinner and I leapt at the chance to revisit the restaurant with a prestigious reputation serving probably the best Italian food in London. 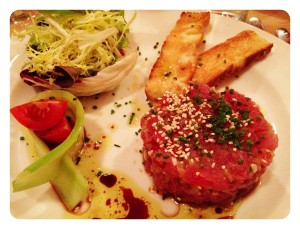 When Assaggi first opened in 1997, it was simply impossible to get a table.  The dinning room is small (its décor I shall come to later) and bookings are staggered so that ‘the kitchen isn’t under too much pressure’.  16 years later and now much easier to secure a booking, I was curious to see how the renowned Notting Hill eatery was faring.

Above a pub, the restaurant’s décor is unusual.  But not really in a good way.  The walls are very orange and there are blue canvases hung randomly around the room.  I think my Blonde was a little disappointed having heard such great things about this Italian stallion.  And I agreed, it was a bit like eating in a giant peach – but without James.

The menu is in Italian, therefore a little useless for us common folk.  So, the bilingual waitress took a big inhale of breath and whizzed down the menus translating as she went.  I literally wanted everything she described but managed to settle on the tuna tartare to start and the osso buco with creamy mash as my main.  Harping back to the deserts of the 90s, we all shared the tiramisu with a round of Amaretto. 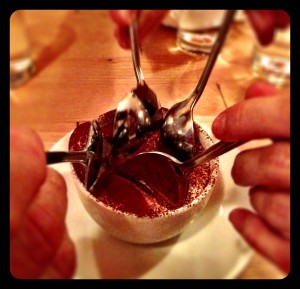 4 spoons dig in to the taramisu

And the other diners?  We decided that they are old-school, posh West Londoners.  They clearly appreciate the fine food that Assaggi continues to deliver and hardly sneeze at the prices to match.  It was at that point that I remembered – not only did this superb cuisine feel like a treat to eat, the bill proves it.

But we had needed to meet my Blonde’s not-so-new-man AND keep an eye on Assaggi’s reputation… so it was all easily justified.