I often wonder why I like unusual films while others tend to veer away from them. I suppose I am attracted to the way it makes you feel as you watch them. She Monkeys, Lisa Aschan’s debut feature, certainly does not make for comfortable viewing as it pushes the boundaries of political correctness to breaking poin 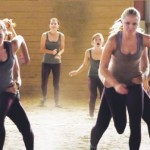 Billed as a taboo-busting modern Western, the award-winning Swedish screenplay follows a trio of young women for whom gender is both weapon and toy.  Two of these females are teenage equestrians Emma (Mathilda Paradeiser) and Cassandra (Linda Molin).  Both training as part of a local performing team, the girls are constantly competing with each other for physical and psychological control.   Their relationship is intensified by a growing sexual attraction as they negotiate this competitive streak both in their training as well as when hanging out together.

The third member of the trio is Emma’s seven year old sister, Sara (Isabella Lindquist).  While the girls are clearly being brought up by their single father, we sense Sara is very much ruling the roost while her older sister is cavorting around with her new, rather dominant, friend.  In one scene, a local swimming pool attendant advises that Sara should be wearing a bikini top for modest reasons, suggesting that there have been ‘problems with men’ in the past.  Subtly referring to paedophilia in this way continues Aschan’s mission of insisting a theme of audience discomfort.  She explains: ‘I put a lot of work into creating a set of rules for the development of the story, that way the choices I have to make never is a matter of taste’.

Certainly this film is beautifully crafted, but it was not to my taste.  However, while I did feel tense and awkward at times, I could admire the spellbinding, powerful females set against a backdrop of equestrian art. But the plot is confusing, disturbing and rather startling at times and I am not sure that this makes for pleasurable viewing.   All in all, Aschan has delivered here a semi-erotic thriller in a category of its own.