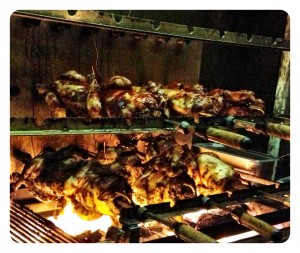 When I married Him, I knew I was not only signing up for years of marital bliss but I was also subscribing for at least a chicken a week.  He loves his roast chickens in a way that only a meat-loving man can appreciate. And so, there was no question as to who should review, Chicken Shop, the recently opened Soho House Group restaurant, with me.

And I use the word ‘restaurant’ in the loosest form. Chicken Shop, unlike the other venues in the Soho House stable, is open to the general public and looks more like a 1950s American general store than anywhere one might private dine. 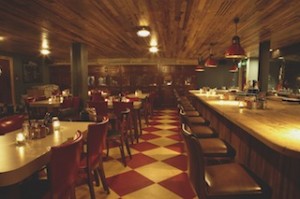 the interior of Chicken Shop

He and I were carless (or more accurately keyless due to some stupidity on my part) so we Hailo’ed our way to Kentish Town.  As we passed the, now renamed, HMV Forum, I reminded Him of our early-days dancing date there.  The sticky, bouncy dance floor followed by the no-sign-of-a-coat in the cloakroom made me smirk.  He was more interested in pointing out the rather handsome Victorian houses, lining our route. 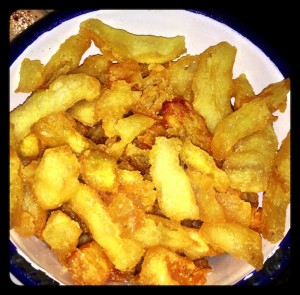 As we entered Chicken Shop, by the discrete entrance on Highgate Road, we were faced with our first glimpse of hipster heaven.  Think New York mixed with Shoreditch.  The ridiculously happy while super busy staff offered us a drink at the bar while we waited for our table to be ready.  There is a non-booking policy, but don’t fret, the beer is good.  Guiness, Birra Moretti, Camden Pale Ale (brewed just around the corner) is all served on draught at £2.50 for a half pint, or there are glasses of wine – ‘House’, ‘Decent’, or ‘Good’ (£4, £5 or £6).

The menu is up on the wall.  It’s optionless, brilliantly optionless:  chicken, chicken and more chicken.  Sides, enough for two, are equally brilliant:  coleslaw, chips and corn-on-the-cob (£8).

He was delighted and rated the chicken, chips and other sides very highly.  As a chicken-critic, you shouldn’t take this lightly.  We got messy and only talked in between mouthfuls.  That was until… the homemade apple pie moment.  The film American Pie has made/ruined that dessert, depending whether you ask Him or me.  But Chicken Shop has put apple pie (£4) back on the dessert map.  It’s spectacular and needs to be eaten half drowned in the cream on offer. 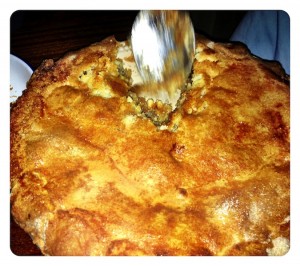 In summary, He and Nick Jones would both vote roast chicken as their ultimate favourite meal – and I’d happily join either of them at Chicken Shop.