In the first of my (hopefully many) guest blog posts, my Neighbour friend reviews Henry V at Shakespeare’s Globe: 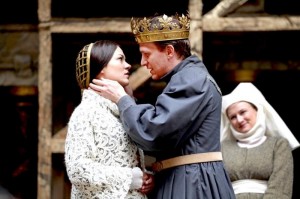 With a feeling of dread akin to the gloom I remember feeling at school, heading off to watch A Midsummer Nights Dream for the third consecutive year, I dragged my feet unenthusiastically South of the River last night for my “no longer a surprise” surprise trip to see the Shakespeare’s Globe production of Henry V.

My “surprise” birthday theatre trip was foiled 2 weeks ago, when a “Globe” envelope dropped onto my doormat. Excited me rushed to my computer in anticipation of discovering an evening of Macbeth awaiting me. Horrified me discovered to my dismay that my “treat” was an evening of Henry V.

I am ashamed to admit that I am not a lover of Shakespeare. Indeed at school, I don’t think I ever actually read a single entire play, instead meticulously studying Letts Revision guides to help me scrape my way through English Literature O’Level. So as I ungratefully shuffled into The Globe last night, I was expecting long, dull, political, humourless Shakespeare. I could not have been more wrong.

Once I’d read the Synopsis (essential to understand that King Harry was to plan an invasion of France following a patronising gift of tennis balls from the French), I was gripped by a superbly directed production that managed to strike a balance between the drama of Alpha Male English Royalty  and the humour of leek eating Welsh soldiers, with some commode hilarity thrown in. Such was the effectiveness of both the clever stage direction and powerful acting that I quite forgot the play’s 16th century language and the fact that I was meant to be thoroughly bored. Instead, I fell in love with both Jamie Parker (a charismatic, heroic and dashingly attractive King Henry) and the entire production.

As I sat down at the end of my standing ovation, I turned to my smug husband.  As he looked at me and said “I told you you’d love it”,  I had to admit it, he was right.  I had loved every single minute.

(If you too would like to guest blog for LifeofYablon, do let me know by emailing your suggestion to editor@lifeofyablon.com )