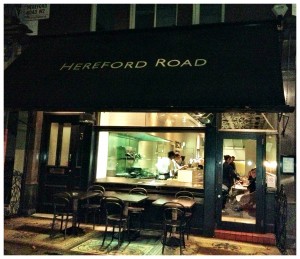 Tom Pemberton’s restaurant, Hereford Road (3 Hereford Rd, W2) is on the lips – it seems – of every foodie.  I first visited with Bill Granger and his wife, Natalie, when my brother and his wife were visiting from the US.  And then, as I repeatedly ask those-in-the-food-know ‘where would your last meal be?’ type of question, Hereford Road bobs up again and again.

So when foodie friend asked where she could review with me, a table was booked and our mouths began to water.

Tom, previously head chef at St John Bread and Wine, attracts his type.  An old Westminster boy (Giles Coren’s school buddy) and a local Notting Hill-er, Tom’s diners are immediately identifiable as his ilk, with a few additional 60-something thesps thrown in for good measure. 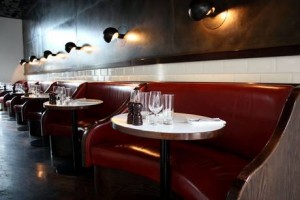 the ‘love seats’ opposite the kitchen

The restaurant itself is divided into 3 areas.  The upstairs ‘love seats’, adjacent to the open kitchen, is where the lovely Natasha Abrahams (The Orchard) loves to sit and nibble on her roast quail. 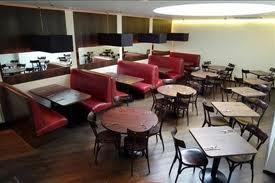 A few steps down takes you to the lower ground floor where red American diner-esque booths line one side and desperately un-feng-shui-ed tables perch on t’other side. Esther Walker and I had discussed this unusual lay-out in detail as, more than ever, it matters where you sit at Hereford Road. 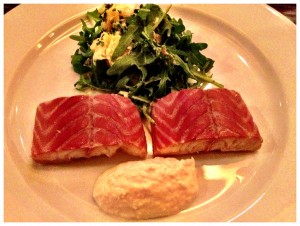 And so we sat (four of us as foodie friend and I had brought along our Hims) at a booth and ordered away.  The menu is more meat focused than most but the non-meat-eaters among us set their hearts on the brill with roast cauliflower (£14.50) as their main while I indulged in the partridge (reminding me of Mini’s endless carol singing) which was served with lentils and chanterelles (£14.20).

You’ll notice that I didn’t mention my starter.  I had the smoked eel.  It wasn’t offensive in the slightest but was also most unremarkable and surely not worth £7.40.  So that’s why I didn’t mention it earlier. 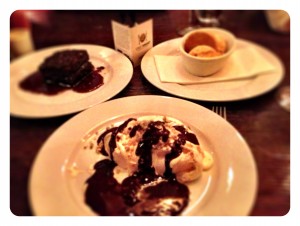 saved by the desserts

There’s more of a story about the brill though.  Wow – did this brill travel?  First, foodie friend pointed out to a slightly clueless waiter that it wasn’t cooked.  It was shiny and cold and most definitely NOT COOKED.  The waiter tried to grasp her point and, eventually, we persuaded him to take it back to the kitchen.  But then it returned again, NOT COOKED.    At this point we gave up and moved onto dessert.

And this is where Hereford Road utterly redeemed itself.  Drum roll time.  Between the four of us, we feasted on treacle tart (£6), rice pudding (£6) honeycomb ice cream (£6) and…. best of all…. chocolate, meringue and chestnuts (also £6).

So, next time, I’ll drop by, sit opposite the kitchen and head straight for dessert – like a real foodie.