Ibiza discovered: The home of more than House. 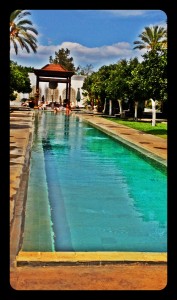 The undisputed party island of the world, Ibiza is often used as a adjective simply to imply excess. But I had also heard via various reliable sources that Ibiza has another side to it: a bohemian, lounge-cool and breathtakingly beautiful side to it.   So I wondered if a family could holiday in luxury while still marveling at the hippy and lounge party scene.  And I gladly took on this investigative mission with Him and the Smalls to discover this often mistaken white isle.

But, as with all research, without a little help from my friends, I would not have been so well informed. It seems that the indisputably Ibizia-converted are as devoted as those who excess here.  I wanted to experience the uber cool without exclusion of the kids in tow and my lounge-lizards didn’t not disappoint in their numerous recommendations.  You know who you are – thank you – and see you next year for more of the same.

a double sunbed lounger at the Atzaro

With only 11 sleeps in hand, I had to choose our accommodation carefully.

I had heard about the Atzaro hotel (central Ibiza) long before we had decided to make Ibiza our family summer holiday destination.  However, the hotel, sushi lounge bar and spa with additional beach location further up the Eastern coast, built some eight years ago, exactly sum up why Ibiza should not be mistaken as simply an island of insane clubbers.  He and I decided to go against the grain and take our Smalls to a hotel less suited to their type and more suited to the lounge lizards we wished to be.

And we were delighted.  Although we all slept in one room (something I usually object to with huge distain) and there were no specific kids activities (one of my strict criteria so that I can holiday with Him too), we were utterly over-the-top delighted.   Neither of us managed to use the spa during our three-night stay but we didn’t need to.  The atmosphere is almost entrancing.  With only 20 rooms, by day the hotel feels secluded, remote and wonderfully well-catered.  By night, with a dj on the decks, the sushi bar kicks into action, the most glamorous Ibizans arrive and the party begins. While I’m sure the kids were unaware of the quite astounding people-watching on display, they were thrilled by the food, music, entertainment and of course the usually late nights. 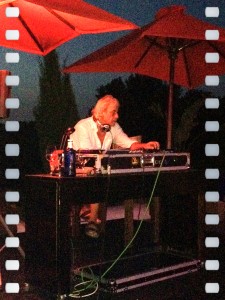 Jon Sa Trinxa at the Atzaro

After our magical stay at the Atzaro, the Insotel Fenicia Prestige on the outskirts of Santa Eulalia had a tough act to follow.  The hotel is one of the newest five-star spa hotels on the island and, a few steps from a local beach, offers a large pool, an impressive array of restaurants and bars and… conference rooms.  And so while there was no doubt that our vast and extremely comfortable suite (2 bedrooms with an adjoining sitting room) was perfect family accommodation, I did feel that we were staying in an efficient conference centre rather than an Ibizan luxury family hotel.

He says that I am unfair and that He would stay there again.  I, on the other hand, like reception to recognize me when I’m locked out of my room or to occasionally greet the Smalls with a friendly ‘hola’.

Local Santa Eulalia, Ibiza’s third largest resort, is certainly a destination for families seeking a beach holiday. There is a beautiful, palm-lined promenade running the length of the broad and sandy beach, (which is perfectly safe for the kids), with a selection of hotels and apartments in and around the town itself.

I strongly dislike overcrowded beaches full of the ‘wrong sort’.  And I knew we had to do our research properly to avoid disappointment.  In preparation, I had contacted the most Ibiza-knowledgable PR I knew (she even got married there last month) and she immediately sent over her must-visits.  On top of this, she persuaded me to practice some yoga with her friend and client, Larah.  As founder of Ibizia Retreats, Larah is as integral to the island as anyone could be.   Specialising in yoga and wellbeing while you holiday, she converted me within minutes to her way of life. So with both of their input, I was more than beach-bound.    After a little trial and error, our favourites beaches were in the North and East of the Island:  S’Aigo Blanca, Es Cavallet, Bennirras and Cala Portinatx.  I should just add that we had a disappointing trip to Cala Nova (imagine over-sized sardines) until we clapped our eyes on the concept that is Atzaro Beach set above sea level. This exclusive location played host to Jade Jagger’s 1971 party and had us dancing one evening with the Smalls to Grove Armada until a little past our bedtimes.

S’Aigo Blanca beach in the North of the island

There are a number private beach clubs which are more for the utterly-beautiful-without-kids but we did insist on spending a half day at Amante Beach Club, just to see how the other half holiday.  Run by ex international DJ, Dave Piccioni, we found the menu to be as breathtaking as the view and, of course, left with his CD of tunes in our beach bag.

It’s important to add that the beaches are a way of life in Ibiza.  Whether you are listening to the bongos, sipping cold beer, posing or simply building sand castles, the vibe is relaxed and chilled. 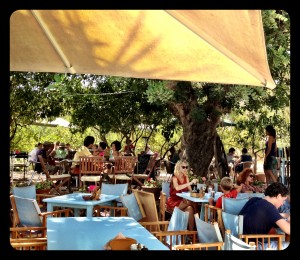 On an island not much larger than the Isle of Wight, I was literally blown away by the quality of the meals we enjoyed.  Surprised by the rich variety of restaurants, I dragged my gang in all four directions until we had ticked off all of our foodie recommendations.    My favourite was La Paloma, where Jade Jagger and friends eat often.  Healthy (even the coca cola is organic) food is served in a truly blissful setting.  He loved Ca’s Pages with its (manly) enormous meat grill and local Ibizian fare.   The Smalls adored El Chiringuito on El Cavallet beach.  It has a mini club where they can do arts and crafts once they have eaten their weight in burger and chips.  In most of the restaurants, there is a dj working his magic and in fact, now home, I am finding eating out in London a little soulless with the background tunes.

The best thing:  No arugments about where we holiday next summer.  We are already looking for a villa to rent on the island.

The worse thing:  Apparently San Antonio’s nightlife and finding a parking space in Ibiza Town are the worst things about Ibiza.  So we avoided both.