Losing my legs and finding my nose 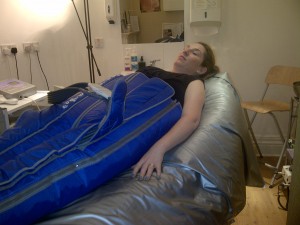 Me in The Balancer

I was dubious when I set off for the Age Management Clinic on Harley Street.  Promising an awful lot, this week saw the launch of yet another expensive way to anti-age, lymph-drain and slim us down.  I bring you, from Henley-on-Thames, The Ballancer.

With sophisticated pump units connected to what looks like a big blue sleeping bag, I slipped off my trousers and jumped in.  Feeling a comfortable amount of pressure up and down my legs and stomach, I tried to relax.  The Balancer claims to be equivalent to 24 pairs of massage hands so I pictured beaches in Thailand and spas in Bali.   Until Anita, my therapist, turned up the pressure.  And there I was, back in the room again.

One session costs £50 and, to be honest, I did not feel particularly ‘body light’ nor ‘energised’.  However, the compression therapy had soothed my sore running legs and I’m sure my lymphatic flow had been enhanced, honestly….

With a pit stop at The Natural Kitchen, to catch up with the busy jeweller (never a bad choice of friend), I promised myself a quick visit to the slightly alternative fragrance boutique, Le Labo on Devonshire Street, W1.  In a perfume world where thousands (or at least it feels that many) of fragances are launched each year, I find smell shopping almost impossible.  Very few seem to appeal to me while friends seem to change their chosen whiff with the wind.  So, I was curious to see if the novelty Le Labo offers would seduce me. 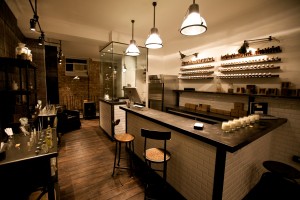 The concept of Le Labo, a reaction to mass-produced commercial perfume, launched five years ago and now has boutiques in NYC, LA and Tokyo.  Perfumer Fabrice Penot left Giorgio Armani dissatisfied by the marketing demands on his creativity and teamed up with Eddie Roschi to create a lab where fragrances are blended by hand on site, rather than in a factory.

Novelty value and stunning shop interior aside, the smells set out to ‘shock’ and that they do. I’d step aside rather than sit next to someone wearing anything so strong and emphatic.