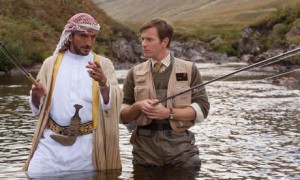 It has been one of those weeks.  He and I have been living separate mid-week lives, influenced by his work and my reviewing.  But instead of collapsing into a heap on the sofa, I felt we needed some harmless cinematic fluff with maybe some romance thrown in for good measure.  Just to be clear, I had certainly not chosen Salmon Fishing in the Yemen (based on Paul Torday’s novel) for intellectual stimulation or inspiring art house viewing.

In a nutshell, Ewan McGregor staring as Dr Fred Jones, an uncomfortably shy scientist working at the Department of Fisheries, falls in love with Harriet, (played by Emily Blunt) an ambitious and sloaney financier working for a fly fishing-obsessed sheikh.  In the romcom world, an unusual plot I admit.  Except that Fred is, of course, in a loveless marriage and Harriet has recently fallen for a handsome soldier who is currently ‘missing in action’.  Yawn.  The rest of the screenplay is as predictable as today’s weather.

Thankfully, Kirstin Scott Thomas – as the prime minster’s Rottweiler of an advisor – justifies the price of the cinema tickets.  Calling the shots as well as the punch lines, she delights us with her lip-pursing and eye-rolling.

With On Golden Pond and Dirty Dancing listed in my top 10 films of all time, I cannot deny a secret love of cheesy viewing but… this film is wooden, dull, unconvincing and, as they say:  ‘1 hour and 52 minutes I will never get back’.

Filed under film, him