spicy (and not dull) cocktails

Yesterday was just a dull Tuesday.  Dull weather.  Dull food in the fridge.  Dull errands such as buying more printer paper.   That is, until the kids were tucked up in bed.  Accompanied by always-ready-for-a-night-out Neighbour, we scooted off to meet our friend, the ex-TV girl at the least dull cocktail bar EVER.  And now nothing is dull.  I am ever-so in love with Zenna Bar, the genius cocktail hideout opened by (and located under) the infamous Indian restaurant, The Red Fort on Dean St, Soho.

Our barman, Matty, saw us coming; overzealous mums looking for a good time.  He greeted us with a House Nectar (the secret house cocktail), a Garden Martini (Bombay Sapphire, fresh mint, lime juice and you know the rest) and a Raspberry and Mango Margarita (all £8).  Nibbling on some utterly delicious bar snacks from the kitchen upstairs (our favourite was the Mustard Coated Broccoli Tandori £7), we had no idea what Matty was cooking up for us over at the bar.

And that was when we met Illiana, The Golden Dragon (£15). Rum, spiced rum, Santan’s blood, some more rum, lime and orange juice, all flamed with Wray and Nephew rum.  Apparently, this is the world’s spiciest cocktail and I’m not about to disagree.  I managed two sips, followed by gallons of Gin Fiz (served in a fire extinguisher which I thought was pretty much red rag to a bull). 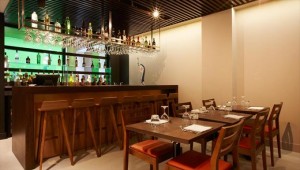 With a lack of decorum, we tottered over to Kingly Street to check out Cinnamon Soho, the new little sister restaurant of The Cinnamon Club over in Westminster.  Of course, it was going to hard to live up to Matty and all that Zenna had to offer but Leonardo, the  Brazilian main man, and the team at Cinnamon Soho, continued to ply us with Burning With Passion (£8), Lotus Blossom (£8) and other delicious concoctions.  Unanimously, we voted their Burnt chilli Indo-Chinese chicken (starter – £4.80) and their pistachio ice cream to be “worth crossing town for”.

And then somehow we got home.  That bit might have been dull.  I simply can’t remember.