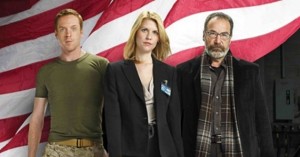 Sunday evenings have not been the same since 18th February when, following rave reviews from across the pond, we were first introduced to the addictive viewing that is Homeland (Channel 4).  Usually I feel a little twitchy when fitting a glaringly obvious viewing mould.  This television tension, centred around an ex Al-Qaeda prisoner of war now potential terrorist threat to the US, is highly targeted Sunday night viewing for middle aged parents looking for extra circular excitement while their precious offspring dream of the fast-approaching new school week.

Last night saw the finale of Season 1. Produced by Howard Gordon of 24 fame, we initially had visions of a female-take on Jack Bauer.  But Homeland has been neither a clone nor a one-man show.  As an audience equally fascinated in each of the three leads (Damian Lewis, Claire Danes and Mandy Patinkin) and their layering mysteries, we – the resident suspense junkies – can’t get enough of Brody and the possibility of him having been turned against his country.

So, sofa bound and with baited breath, we weren’t disappointed.  In fact, a sure sign of great viewing: today we are still reeling from the almost-act of terror, some shocking signs of mental illness and the ongoing suspense of this dramatic series.

But the real fear is how we will cope without such drama until Season 2 hits our screens?  It’s been said before;  great television dramas save marriages.   The whine of ‘why don’t we do anything together?’ is answered perfectly by the box set offering.   And it doesn’t need to be Homeland, but it helps.