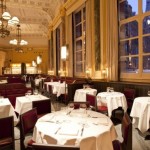 After such a Royal weekend, it seemed perfectly fitting for one to dine somewhere as grand, majestic and downright glorious as The Gilbert Scott at the St Pancras Hotel. As you spin through the revolving doors, the height of the ceilings alone is enough to take your breath away in this awe inspiring space originally designed by its namesake, Sir George Gilbert Scott.

My chosen dinner guests that night were my Friday morning running buddies. Training for a 10k in September is a good enough reason for us all to sweat and swear in equal measure as we lap Regents Park each week. It felt only fair that we should reward ourselves with a night out.

Sitting down at 8.45pm, I was surprised to see every table was taken. Not only had the country over-partied during the long weekend, but also, fine dining restaurants are rarely fully booked nowadays. Eavesdropping on conversations, I soon picked up that, for the most part, these diners were corporates. Deals rather than dates were being chewed over in this quintessentially English dinning room.

No sooner than we had slid into our seats, the slick waitress had brought us over the house cocktail, 1873 (Bombay Sapphire, cranberry, apple and rhubarb, £9), named in honour of the year that The Midland Grand Hotel (now St Pancras Hotel) originally opened.

One cocktail and a lot of chatter left me unsure what to order as my starter. Plumping for a plate of Brown and Forest smoked salmon with oatmeal soda bread (£12.50) was not my greatest of menu choosing moments. Perfect for a busy businessman but underwhelming for an opinionated reviewer. In fact, the plate was so pinstripe, it even lacked the squeezy lemon on the side.

My main event more than made up for this though; the calves liver and bacon with caramelised onion mash (£19) was heavenly. Velvety soft and wonderfully comforting, my plate was returned to the waitress squeaky clean.

As we drank our way through a couple of 2011 Greywacke New Zealand Sauvignon Blanc (£48), the restaurant emptied which, of course, allowed our conversation to deteriorate. Talk of affairs, marriage discrepancies and then the recurring dream of a girls’ weekend away. Brought back to reality by our waitress, we were offered a visit to the industrial sized kitchen where the chef’s table seats up to 10. For me, there is nothing more exciting than seeing the heart of the restaurant and I could have spent hours just watching the chefs and their teams work their magic.

The puddings (not dessert here where the English are fed their native fodder) were not light. We shared a couple of Apple Amber baked apple tarts with meringue on top (£7.50) but it was the salted caramel with chocolate sauce (£5) that stole my heart.

I left feeling as if we had rediscovered some of those wonderful English classics. Not too stodgy, and without excess pomp and ceremony, we had been fed and served well. The value was not too bad either. But I think one could say The Gilbert Scott lacks a little oomph. Retro is good and historic is admirable, but a night out needs an element of thrilling excitement and this is where the restaurant perhaps falls down. However, it is certainly a perfect venue for a work dinner.

This article appears on Culture Compass.