in awe of Rust and Bone 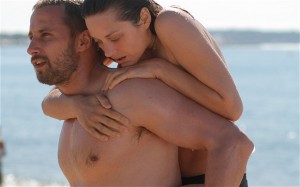 A whale trainer meets a nightclub bouncer and they fall in love.  The end.  That’s how to make Jacques Audiard’s beautifully directed film, Rust and Bone (De rouille et d’os) sound dull.  In reality, it is anything but.

Stephanie (Oscar-winning actress Marion Cotillard) suffers a horrific accident and, understandably, feels her life can’t continue.  And without indulging her in useless sympathy, Ali (Matthias Schoenaerts) offers her a friendship worth living for.  But Ali can’t offer everything.  The ex-boxer and his five year old son move in with his sister, who becomes more of a parent than he is.  His life is full of one-night-stands with very little luck on the job front either.

The film twists and turns, full of drama until the final scene.  Cotillard’s performance is mind-blowing as she puts her life back together piece by piece. And there is no doubt the beautiful cinematography and emotional music enhances the themes of nature and destiny leaving the viewer in absolute awe.

Rust and Bone won the best film prize at the London film festival and is now on sale on Amazon.